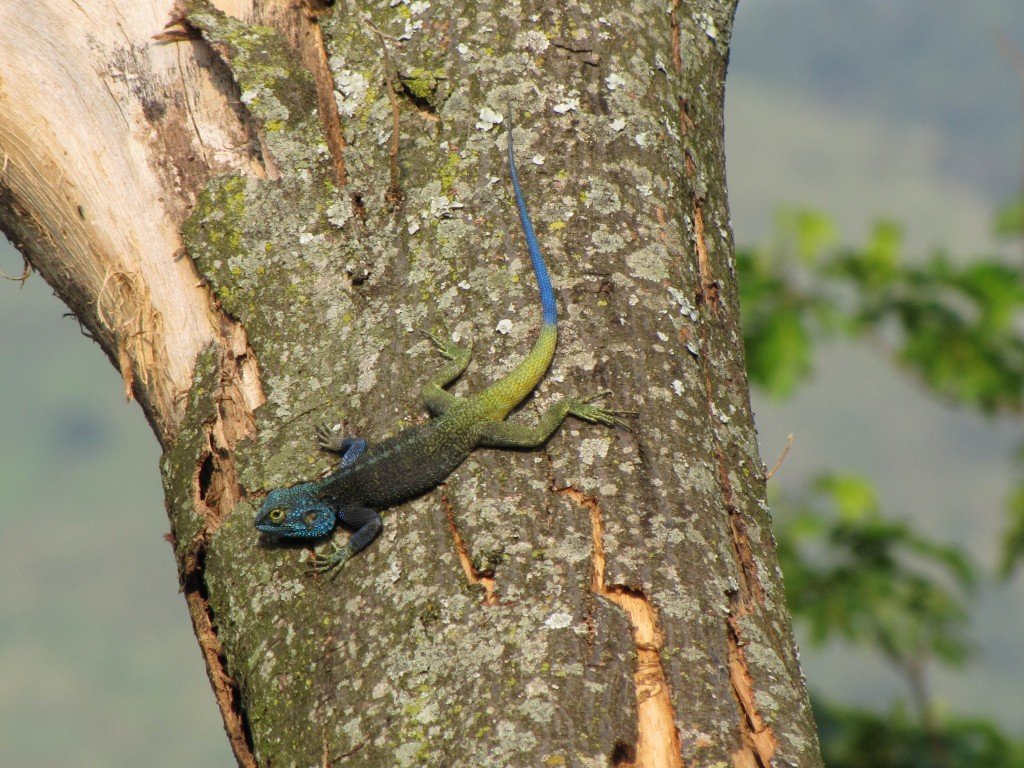 I woke up in the middle of the night by a pressing need to go to the bathroom. But the problem was that I couldn’t see anything, and by anything I mean absolutely nothing. I blinked and realized that it made no difference whether I had my eyes open or shut. I had left my flashlight next to my bed, but when I tried to reach for it, it was nowhere to be found. I didn’t want to run my hand on the floor too far to look for it, because we were in an eco lodge in Uganda, in Budongo Forest Reserve, and I remembered the little gap between the door and the floor.

We were staying at this beautiful lodge only one night so I wasn’t so clear on the dimensions of the room, but I knew the general direction of the bathroom. So I figured I could probably find the bathroom door and switch the light on there. I got up and fumbled in the dark, forward a little step by step, towards the direction of the bathroom. I was able to find the wall, but then I had no idea whether the bathroom was to the left or the right from where I had landed. It’s a good thing I’m not afraid of the dark, because this could have potentially been pretty scary.

Now, as a nomad, I’ve been to some pretty dark places before, like Lapland in Northern Finland, during the winter when the sun doesn’t come up at all. And yet even there, you would see the reflection of the moon, even on a cloudy night, on the snow. Or some glow from some electric device if inside. But here, there was absolutely nothing, only utter, complete darkness. We were in an eco cabin, in a rain forest, in a national park, far from a city with very tall rain forest trees covering the cabin, so of course I shouldn’t see anything, but the experience, as it came by surprise, was a first of its kind to me, and because of it, all the more memorable.

I had to turn around, back towards the bed, simply because I didn’t know how to continue with my search for the bathroom. I was able to find my bed, but in the process of climbing back into it, I accidentally knocked down my mosquito net. By the time I was lying in the bed, I couldn’t help but giggle to myself. It was just so hard to believe my utter helplessness. But even as I was amused, I still needed to go to the bathroom. Good thing I saw Kemal, one of the people I was sharing the cabin with, put on his flash flight: I was saved as he pointed the way to the bathroom from his bed.

The next day I was thinking about the deep, dark African jungle in European literature. As I was experiencing it, I quite enjoyed the actual, literal concept, but not how it has been used as a metaphor for all of Africa as somehow dark and unknown and wild. Lapland in the winter can be all those things, too. I know it’s a 19th century stereotype, but these kinds of things tend to persist in people’s imaginations. But when you don’t connect the amazing darkness to fear and negative things, it becomes beautiful in itself. And it’s rare. I’ve traveled a lot, and had never experienced something like it in an open space like a big cabin. I didn’t even know there were degrees to darkness, this being a full 10.

There was another gift we received from the darkness of the rain forest earlier that evening. We were having dinner at the lodge’s main building, after a successful chimp trek of many hours. We had seen two male chimps and a mother and a baby, and the rain forest trek in itself was a rush. The chimps had moved deeper into the forest than usual so we had to get off the grid of paths to find them. Our ranger was breaking twigs so we could find our way back: added excitement, especially as we made it out of the forest only just before it got dark. And the chimps were a hoot: they looked so human like that I couldn’t help but wonder whether they were observing us rather than we them. Having a lovely dinner on the terrace with some wine, we were feeling happy and accomplished, talking about our trek.

Then Kemal went to get something from our cabin probably about 30 meters deeper in the forest and came back, excited, to get Danny and I. We followed him to see what was happening, and it was one of the most beautiful things I have ever seen: thousands of fireflies dancing in the air, as if a long string of blinking Christmas lights. I’ve seen fireflies before but never so many together, and never somewhere so dark. They literally lit up the section of the forest by their dance. I was feeling even happier as we witnessed the beautiful performance, which could have not happened in a place with distracting light pollution: sometimes you need to be somewhere really dark to appreciate its beauty.