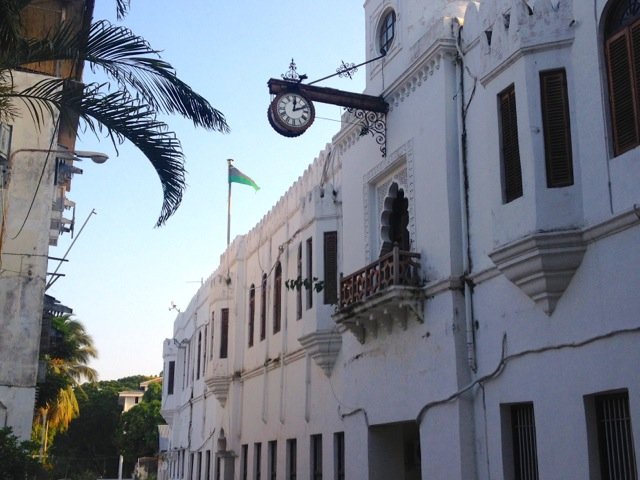 “Chilling in Zanzibar” was a phrase I used already years ago, dreaming about the place with a friend, who lived in Uganda at the time and was planning a trip there. Looking back, I didn’t know much about the island and I’m not sure what I imagined Zanzibar would be like and why I associated it with chilling. I guess it was just so far away and exotic sounding that to be chilling there sounded incredibly relaxing and exciting at the same time, as it would to any traveler I’m sure.

I finally had a chance to go to Zanzibar on the first day of 2015. My friends and I were a bit hung over from the New Year’s party in a roof top club, but we had decided to take the last ferry from Dar Es Salaam at 4PM, so it wasn’t all that bad. Except that quite a few people had the same idea and it was hot and humid and boarding the ferry was complete chaos with a lot of pushing and shoving. But we made it, and after a few hours on the ferry we saw the big sign: “Karibu Zanbibar, ” which means “Welcome to Zanzibar” in Swahili.

Getting off the ferry in Stone Town transports you to a whole different world from the mainland Tanzania. How to capture the atmosphere in words? It’s relaxed and less hurried like hot climate island cultures often are, but it’s nothing like the Caribbean. I usually try to stay away from the stereotypical Western exoticisms circulated about distant places, yet it’s easy to see why a quick google search on Zanzibar pops up these particular words: “fascinating,” “magnificent,” “romantic,” “mysterious,” “exotic,” “majestic,” and of course “spice island,” because of its historic significance as the center of spice trade.

Stone Town, once the capital of the Omani empire, was declared a UNESCO World Heritage Site in 2000. It has a distinctly Arabic feel with narrow streets and beautifully carved doors with a lot of small hotels and restaurants but also a strong, friendly vibe of a Swahili town: this is no artificial, made-for-tourists town façade, but a living and breathing center of the semi-autonomous island region of Tanzania. Things I learned: Zanzibar’s Swahili majority overthrew the last Arab sultan only in 1964 and was then made part of the new nation of Tanzania (the name comes from the combination of Tanganyika, the mainland, and Zanzibar). As the island has its own distinct multicultural history, it’s no wonder it still today has dreams of independence.

I loved strolling the streets of Stone Town, which is a small area easily covered by foot. We visited the busy fish market and I bought Zanzibar apples, which is its own thing entirely: looks like an apple but tastes like a mixture of guava, pear and apple. We had a fantastic Swahili lunch, which has influences from Indian food, as there is a big Indian presence in Zanzibar (and mainland Tanzania) as well. We visited the Palace Museum, which is a run down 1890s home for the Omani sultan, while the House of Wonders, a huge ceremonial palace for Sultan Barghash, the first building in East Africa to have an electric elevator, was unfortunately under renovation (and it looked very much in need of one.) We had drinks at a beach bar and one night had a fabulous Ethiopian dinner, and we also visited the Mercury Bar, named after Freddie Mercury, who was born in Zanzibar.

My favorite place was a chance visit to a small Princess Salme Museum. We happened to pass it on a narrow street, just wondering around. It wasn’t exactly open but had a sign with a phone number. We called, and less than 10 minutes later had the best possible history lesson of Zanzibar from Said el-Gheithy, a born and bread Zanzibari, living and teaching most of the year in Germany. He’s an enthusiast and an expert of Princess Salme, the daughter of the Omani Sultan and one of his concubines. She was born in 1844, fell for a German trader, got pregnant and eloped with him to Germany: juicy stuff! There she brought up her four children as a young widow and wrote books about her life growing up in the Sultan’s palace and making witty comparisons between life in Zanzibar and 19th century Europe. One of her observations was that the slaves in her father’s palace had a much better life than the poor of Germany.

Am I forgetting something? Right, the beaches that Zanzibar is known for. We did also go stay at a beach town called Jambiani. And the beach, I have to admit, was incredibly peaceful, with beautiful white sand and waters more turquoise I’ve ever seen. I’m not a beach person exactly, but I could have easily stayed a few extra days, walking on the beach, swimming in the Indian Ocean (though there were jelly fish to look out for), eating incredible seafood. The many beach resorts in the north of the island are where many tourists spend most of their time, but there are still small beach communities like Jambiani that have a local, chilled vibe and no huge, over-developed resorts.

If you’re into some serious chilling in Zanzibar, one of the small beach towns is where you should head, but don’t forget to also chill in Stone Town. Few tips: The Forodhani Gardens has an atmospheric evening food market with stalls after stalls of excellent seafood, meats and veggies. It’s a great place to eat and relax, have a sugarcane juice, observe local families do their thing or spot teenagers posing like gangsta rappers, just like anywhere else in the world. The Africa House terrace is known for the best sunset spot, and so it is. My favorite moment there was when we were sipping our beers and our Ugandan friend suddenly, quite bluntly, asked us: “Why are all mzungus (white people) so obsessed with sunsets?” Seemingly obvious, it’s actually not the easiest question to answer.