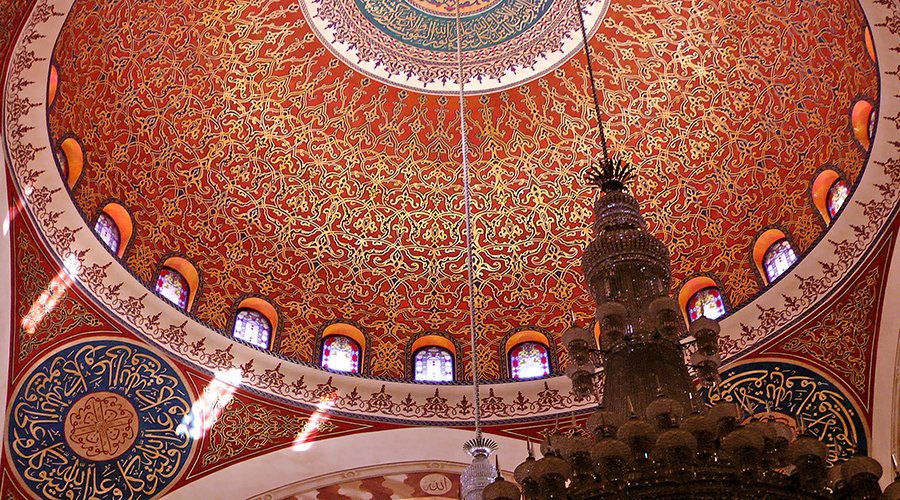 I had just spent two and a half weeks in Jordan, but nothing came out of my half-hearted efforts of taking Arabic classes there.  One course I tried to sign up for ran too long for my travel dates.  Then I just traveled (secretly happy that I had at least tried to take a class), and learned about Jordan instead of also learning the language I loved hearing all around me.

I have taken an Arabic class in New York a few years ago, but all I really learned was the alphabet.  And by learned I mean that we went over the letters and that I remember some of them better than others. Sometimes I find myself playing with an Arabic alphabet iPhone app to kill the boredom of the long New York subway rides. But I never really learned to read with any fluency.  It takes me so long to read a word and to realize the sounds together make for example a “pizza” that you cannot really call it “reading.” It’s more like figuring out a math puzzle.

After a few weeks in Jordan, and less than an hour flight, I found myself walking the hot streets of Mar Michael, an Armenian neighborhood in Beirut, wondering whether the two Middle Eastern capitals could be any more different. While Ramadan in Amman closes all the restaurants during the day and many liquor stores for the whole month, in Beirut the Muslim holy month is hardly noticeable. Or at least in the hip neighborhoods it isn’t. As I was walking among happy hour signs and hipsters drinking espressos, I spotted a plastered print out for private Arabic classes with Khalid, $20 an hour. I figured it was enough money for me to take it all seriously, and as this was my 4th time in Beirut, I could spare time for it.  I signed up for 5 two-hour classes.

Khalid is Syrian, who lives in Beirut with his American wife.  He has a Masters Degree and used to teach Arabic in a university in Damascus. He also used to have a beautiful old house in Damascus’ old town, where his private students stayed.  I have been to Damascus twice before the civil war and once stayed in one of those beautiful old town houses. They are stunningly beautiful, or were in the past tense, because of the civil war.  Now Khalid lives with his wife in Lebanon, like so many other Syrians, and tries to make his ends meet. His sadness is palpable as we look at pictures of his house and Syrian family as part of a lesson that has to do with family members.

Khalid is an excellent teacher.  At times I can tell he’s bored with me trying to read but I can’t blame him.  I bore myself with my inexcusably slow reading, but this is what I need: having to make out words from the letters I know individually, under the pressure of someone listening. I learn some new vocabulary every day but continue to struggle with any bit of conversation.  There seems to be a block in my brain when it comes to Arabic.  It doesn’t help either that the word for “yes” in Arabic, or at least in the Syrian dialect, is exactly the same as “no” in Finnish, my mother tongue.

One day the electricity was out in much of Mar Michael and Gemmayze, the neighboring restaurant and party district, where Khalid lives. Beirut, as swanky as it seems, has daily power cuts. Most apartments, which don’t have generators like hotels, get a schedule of the daily 3 hours electricity will be cut, but this day the lights were out beyond the scheduled time. Bad thing was that I was already sweaty by the time I had walked to Khalid’s apartment and then where was no AC.  That day my brain put on a full stop on learning anything new and I struggled reading even the bits I should have already known.  High-level frustration.

But since Khalid is an excellent teacher, suddenly I noticed that by the end of my trip, I was recognizing more and more words on the radio or just passing people talking on the street.  Maybe learning Arabic is not that hopeless after all.  But just as this started happening, I was at the end of my month-long stay in Arabic speaking countries, so chances are, it’ll quickly be lost again.  Unless I take up on Khalid’s offer on Skype classes, though my brain hurts just thinking about it. Yet the will is there.

If you’re interested in taking Arabic classes in Beirut, shoot me an email. I’d be happy to send students Khalid’s way and I also know an excellent language school run by our local tour leader Nadine. Though Beirut is not the best of places to practice your Arabic as most people you’ll socialize with are fluent in English, French and Arabic. Apparently some Lebanese are so eager to know French that they never bother learning Arabic properly: I was surprised to find out that many of Khalid’s students are Lebanese wanting to better read and write Arabic.

One night in a typical, bohemian yet stylish Mar Michael bar, I was eavesdropping on a table of three next to me. They had just finished a movie shoot and were out celebrating, and as it so happened, discussing the extra-marital affair one of them had been having for the past few years. Nothing out of the ordinary except that this conversation was had in English, French and Arabic, in equal amounts.How very Beirut.