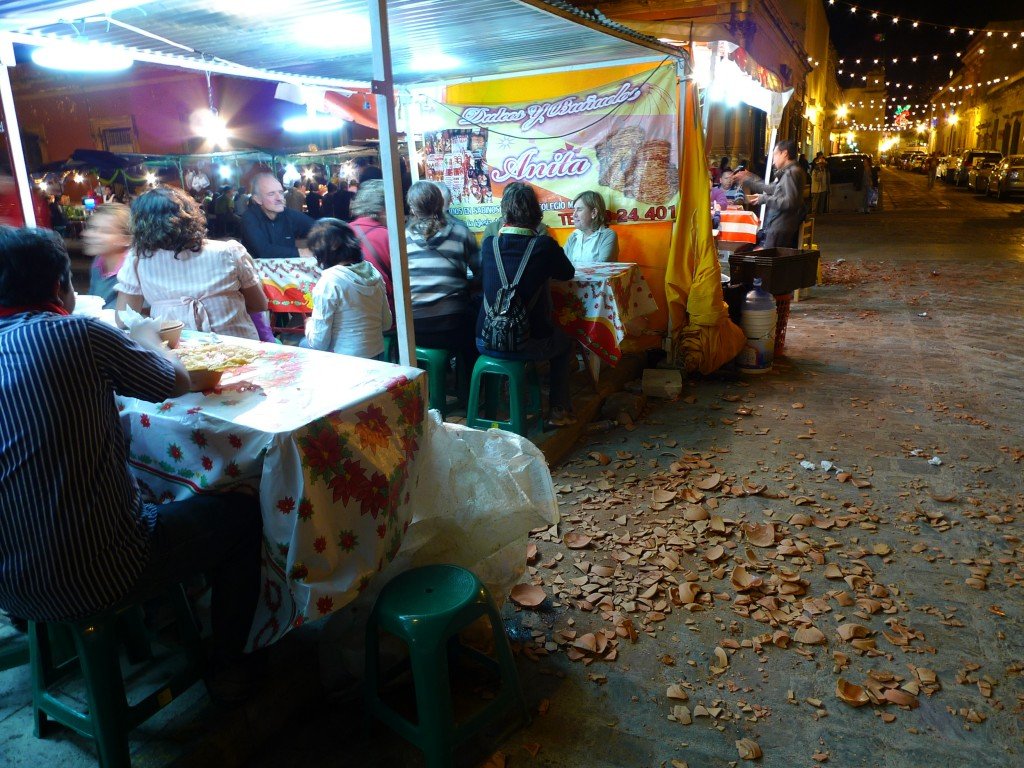 Mexican food’s popularity reaches far. Once, when traveling in Uganda, we were looking for a late night dinner in a town called Masindi. After a long day of traveling on dusty roads, we were absolutely ravished. Luckily we found a dark, little corner restaurant with barely two lighting fixtures, ordered some Bells (a Ugandan beer), which were not exactly cold because there had been a problem with the fridge earlier that day, and took a look at the menu. Turned out that most things we wanted to order were not available as it was the end of the day, except for “fajitas,” which the waitress pronounced something like “fagitas.”

We were a bit skeptical but happy to get anything at all so we ordered fajitas in a corner eatery in a small town in the middle of Uganda. What came to our table was a good example of globalized food trends: we had tiny little dishes, as in an Indian thali tray, of chopped tomatoes, jalapeños, something that resembled sour cream, chopped onion, and ground beef with some Mexican spices. Instead of tortillas, we were given Indian chapati to wrap it all in. There was a hot sauce of sorts. The Indian influences were not a surprise as Uganda has a sizable Indian population, so the Indian food there is excellent and chapati is everywhere.  What was more surprising was how good it all tasted and oddly enough, it sort of even tasted like Mexican food. Or at least close enough to the international interpretations of it.

My favorite type of Mexican food is neither the Ugandan fajitas (as good as they tasted after a day on the road), nor the Nordic tex mex, or the Californian version of Mexican food a lot of my New York friends love, but the regional food of Oaxaca, Mexico. I guess I’m one of those, who agree that Oaxaca is Mexico’s culinary capital. And actually it is where the mole sauce my Finnish visitors didn’t like originates. I don’t mean to be a food snob here. Mexican food in all varieties tastes good. You just cannot go wrong with that mixture of tomatoes, onion, garlic, cumin, chili and fresh cilantro. And yet, these combinations taste better yet in some places than others.

Before I visited Oaxaca, I had been to Mexico City, and loved the food there already.  I’ll never forget the dirt-cheap, late night tacos al pastor (with pork and pineapple) or the pre-Hispanic pumpkin seed mousse that I dipped my tortilla chips in. But Oaxaca still made me go “vow” with the food.  First of all, there are the moles; they are rich and complex sauces that are based on different kinds of chilies, served over meat, and are made of a blend of up to 30 spices. While there can be hundreds of variations of them, Oaxaca is particularly known for seven: mole negro, colorado, amarillo, verde, chichilo, coloradito, and mancha manteles.

All of the Oaxacan moles have a distinct texture and taste based on a different mix of spices and herbs, as well as seeds, nuts, and of course chocolate in some of them. One day Danny and I were in Oaxaca, we took a cooking course that started with a trip to the market with the chef, followed by making stuffed zucchini flowers, our own tortillas and chicken in a mole verde, green mole.  I try and take a cooking course in each place I visit because it’s a fantastic way to learn about the local food culture. This course was no different.  Our chef was a little shy, but only until we got to the market where he got to his apparently favorite pastime: bargaining for the freshest ingredients.  We found all the stuff for our feast in one lively, covered market, and saw piles of cooked chapulines, spicy grasshoppers that Oaxacans eat as snacks and as fillings in for example tacos.

The actual cooking took place in a quiet, spacious, open-air courtyard, covered with trees.  As the chef explained the steps for each of our dish and gave us tasks, we were sipping beers and chatting: a perfect Oaxacan afternoon. Making tortillas turned out not to be all that easy as getting the thickness and shape just right is trickier than it seems.  The green mole was an amazing surprise.  The intense color comes from a variety of green ingredients: two kinds of green chilis, raw pumpkin seeds, sesame seeds, lettuce and Swiss chard, and green tomatoes.  Add in onion and garlic, and of course heaps of fresh cilantro and parsley.  One of the best Mexican dishes I have ever had, and not easy to find in European tex mex places, or even in New York.

Oaxaca is definitely a foodie destination already because its inhabitants live to eat and it shows in the quality of the food: it’s all made with love. It has world-class high-end restaurants, several types of cooking courses from gourmet food to home cooking, excellent opportunities to taste pre-Hispanic dishes, and of course the ubiquitous and always tasty street food.  One of the best things to do in Oaxaca is to sit people watching at night around the Zocalo, the main square, sipping a drink and trying the delicacies from the food stalls.  The only problem is that you’ll not be able to taste all of Oaxaca has to offer in a week. After having visited Oaxaca, I have to admit it’s a little difficult to visit a Mexican restaurant anywhere else, but I try and not compare as these are matters of taste and what you’re used to.  An example of this is how Finnish people love pizza, but their own version of it.  So when I visited Italy the first time a long time ago, I thought Finnish pizza was better than the one I had in Rome. Secretly I might still think so.  But for Mexican food I’m a convert.