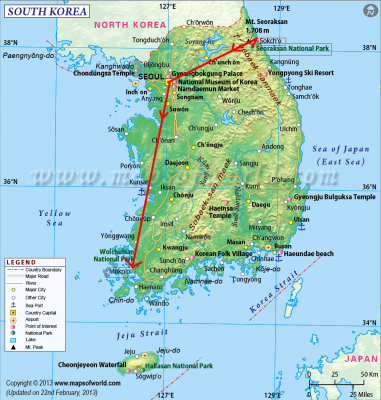 In a tired haze the previous night — after a sauna and mineral baths combo following a day of hiking in the mountains — I had made a ridiculous plan to travel in one day from the Northeastern edge of South Korea to the southwest corner to the port town of Mokpo. I made the decision just based on one recommendation, Mokpo’s seafood specialties, and because the bullet train from Seoul went there. And the biggest part of the puzzle: because I read in my guidebook there is a unique seawater sauna in the nearby town. Of course I wanted to try it. Completely random, flash decision-making, just because I can. The luxury of solo travel.

I wasn’t entirely sure I would make it from the northeast to the southwest in one day, especially as my plan involved eating a lunch at a fish market in Sokcho, close to the Seoraksan national park where I was staying, and dinner at a fish market in Mokpo, the opposite end of the country. But I was willing to give it a shot, because why not? If it didn’t work out, I’d go somewhere else. After making sure my guesthouse in Mokpo knew I was arriving quite late, I was all set to execute my ridiculous plan.

First bits went well: I checked out and caught a local bus outside my hotel within 10 minutes of standing in the fresh mountain air. Then I got off at the southern fish market of Sokcho called. It was still a bit early for lunch but an elderly woman called me to her establishment after hearing me dragging my wheelie bag behind me. She had no menus and spoke no English. She was enthusiastically pointing at muscles and clams but it seemed a bit too early for those so I shook my head. Then she pointed at something I first thought was an eggplant but which turned out to be a stuffed squid. Bingo! This was Sokcho’s specialty dish I had read about but had forgotten the name. The woman started slicing the stuffed squid and proceeded to fry the pieces on a pan.

I felt lucky I had randomly found the dish I really wanted to try. It was delicious, perfect for an early lunch and was eaten with some kimchi of course. As I was half way through, observing a young couple eating noodles with shrimp, the woman offered me some clams. She was pointing at my stuffed squid and saying something I imagined meant that I wasn’t having enough seafood (the squid was stuffed with rice, herbs, veggies and some pork). I agreed and ordered the clams. They were made on a pan with some spring onion. The taste was delicate and delicious. All of this cost about $11.

I jumped to another local bus to the express bus terminal and was able to catch the 12.30PM bus to Seoul. Plan was proceeding better than I expected. The bus ride was easy and uneventful – a good time for napping. We were caught in a bit of traffic in Seoul and arrived 3.20PM. I took the metro from the express bus station to the train station, where I encountered the only bits of difficulty the whole day.

And they too were just bits: There was only standing room tickets left to the next bullet train to Mokpo. Fine. And the train didn’t leave from the station I was at though I had thought all bullet trains did so. It took a little while to figure out where exactly it left, but after taking another metro I was at the correct station and ready to board the 4.50PM to Mokpo. Luckily I was able to get a seat in the corridor and wouldn’t leave it for the next 2,5 hours lest I’d lose it.

Midway from Seoul to Mokpo, while I was deeply immersed in the trippy world of my Muramaki book, the sky started getting darker and darker and by the time we arrived punctually at 7.20PM, it was raining hard and it was chilly. Not the best of time to arrive anywhere. Though my guest house was just 5 minutes from the train station (which is why I had picked it), after buying an umbrella, I decided to head straight to the fish market restaurant in case they close early. On the train (there’s WIFI) I had checked where in the small city the fish restaurants were, which was good because the town was so quiet and sleepy, I would not have found them otherwise.

I was cold, my shoes wet and getting a bit desperate whether any places were open at all. Then on one street I saw some lights. I passed one seafood place, which was open but empty. It didn’t seem the right place for me. Then the same thing happened as at the other end of South Korea the same day: an elderly woman peers out of her establishment curious about my wheelie bag noise and eager to feed me. This is the place for me!

I show a hand signal that I’d like to eat and she points at the board outside and is immediately ushering me in. The board seemed to say they serve only one thing and the price is high. I remember reading these dishes are meant to be shared, so while still outside in the rain holding my umbrella, I use hand signals to get across that the dish on the board is for many people but there is only one of me. The woman nods, points at the board and then at me and says in English “half.” Perfect.

I leave my bag at the entrance, take off my wet shoes and follow the woman to a table at a section where you sit on the floor on a pillow at a very low table. The woman disappears for a while. I had no idea what I had just negotiated a half portion of but since it’s something at the Mokpo fish market, I’m sure I want it. And sure enough I did: it turned out to be raw croaker, one of Mokpo’s specialties I had read about.

The woman brings a plate after plate to my table. One plate has a mountain of raw cabbage covered with the croaker. On another plate there are herbs and lettuce, onto which the croaker is to be wrapped (I knew this from having had pork belly served in a similar way in Seoul), two different types of chili pastes, raw garlic and chili and another plate with mystery parts of the fish. Delicacies I bet. I surprise the woman by asking for soju and nod when she says something I have no idea what. If it’s soju, I’m sure I want it. I don’t even particularly like this Korean national drink, but it seemed like a time one should have some: after traveling all day from one end of the country to another in search of seafood specialties and finally succeeding after being drenched in the rain.

She brings a small bottle of soju and now my dinner is perfect. The croaker is light, fresh and excellent tasting. I eat many pieces as sashimi, dipping it in the soy sauce with wasabi, and make many wraps, too, including some of the mystery parts. Was it the lungs? The heart? How big is croaker anyway? Not knowing the answers doesn’t affect my dinner in any way: all is delicious and probably even more so because my haphazard plan worked out perfectly. And also because I was being fed delicious, fresh seafood by strong-willed, elderly women at opposite ends of the country.