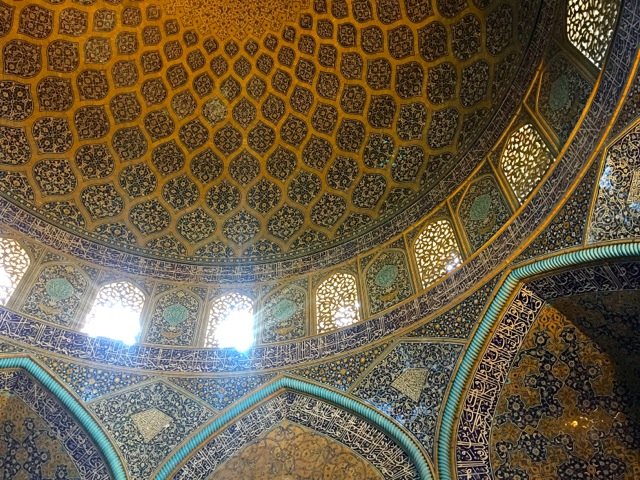 Isfahan or Esfahan. Or Ispahan, Sepahan or Hispahan. The ancient Persian, nowadays Iranian, city has many English spellings depending on the time period and source. Duke Ellington spelled it “Isfahan,” in the title of a beautiful jazz song named after the city, allegedly renamed so after his band’s tour of Iran in 1963.

After visiting Isfahan this summer, it’s very easy to understand why someone would be inspired to dedicate a whole song to the city. Persians call the city “Nesfe Jahan,” which translates to “Half of the World”. The meaning behind the nickname is that Isfahan is so beautiful that if you’ve seen it, you’ve seen half the world.

As seasoned a traveler as I am, I have to admit that I feel more complete in my travels, if “complete” is the right word, after visiting Isfahan. Why it’s not on top of all the travel bucket lists is probably only because of the unfortunate political situation and how closed off Iran has been for a long time. Luckily for Iran and for travelers, there are signs of this changing.

So where to start? The core of the historic city is the UNESCO protected, early 17th century Naqsh-e Jahan Square. The full Persian name translates into “Image of the World Square.” It apparently still looks a lot like it used to when finished around 1629. Shah Abbas, who moved the Persian capital to Isfahan from the northwest, hired a genius of an architect to rebuild the city fit for a capital. The square was, and still is, its center, even if Isfahan is not the capital anymore. To give a sense of its scale: it’s still the second biggest square in the world, only after Tiananmen Square in Beijing.

The square is surrounded by 4 ornate facades: two leading to two of the most beautiful and intricate mosques in the world, one an entrance to the shah’s palace and one the entrance to the bazaar. This was the shah’s brilliant idea was to keep all the powers concentrated in one place: the political, the religious and the commercial.

I’m at loss with words to describe the beauty of the buildings and their mind-boggling details, colors and symmetry. I started at the Ali Qapu palace, already overwhelmed by its elaborate ceilings, moved to the Shah’s Mosque – which is simply the most impressive mosque I’ve ever visited, both in scale and decoration – while many consider the Sheikh Lotf Allah, or the “harem’s mosque,” which the women from the palace entered via an underground tunnel beneath the square, to be one of Iran’s most beautiful.

The best part of these historic structures is that they all are open to visit and two are still in use: The Shah Mosque is where Isfahan’s Friday prayer is still held and the huge, cavernous and labyrinthine bazaar is still very much the center of commerce. The only way I didn’t get completely lost there was by following a suggested walking route, which was difficult enough. I was also on a mission to find a historic kebab place, hidden in the northern part of the bazaar, which is supposed to be the best in town. Once I did, a woman who on her way out helped me order my lamb kebab (there was no menu), came back to tell me that the kebab was coming and that she had already paid for my meal. As an answer to the perplexed look on my face, she just said: “You’re a guest in our country. Welcome!”

This takes me to the other side of Isfahan: the modern, buzzing with energy, and endlessly friendly and welcoming.

Besides a free lunch, all these things happened, too, during my 3 days in Esfahan: I was asked to join a picnic by some random women in the park and had hilarious conversations with them, translated by an inquisitive and rebellious high school student. I posted on Couchsurfing that I’d like to meet with locals and got more than 150 answers (many offering for me to stay with them, though I had said I already had a hotel.) I chose to meet with two Maryams, one an English teacher and another a tourist guide, and learned a lot about life in Iran. The first night returning to my hotel, I couldn’t find my way back (I’m usually never lost!). But no worries: someone took me there on his motorcycle.

And then there’s the TV show I was interviewed for. The events proceeded like this: It was my first morning at my beautiful historic hotel and I was looking for the laundry room. I ran into the owner instead, who, a little distractedly, snagged the laundry bag from my hand, put it on the ground and said “come with me, you will be interviewed for TV.” It seemed that he was so nervous about the TV crew in his hotel that he forgot to ask if this was OK with me. But I didn’t mind.

The program was about renovating old historic merchant houses into boutique hotels. The hotel’s owner, who’s also the architect, had started a motion to preserve the neighborhoods they are in from ugly modern constructs and the program was meant to promote this cause. I’m not sure if my interview will be included in the actual program, but the owner seemed pleased with me praising the historic houses as the perfect places for tourists to stay.

Really seems I got to see and experience half the world in just 3 days.