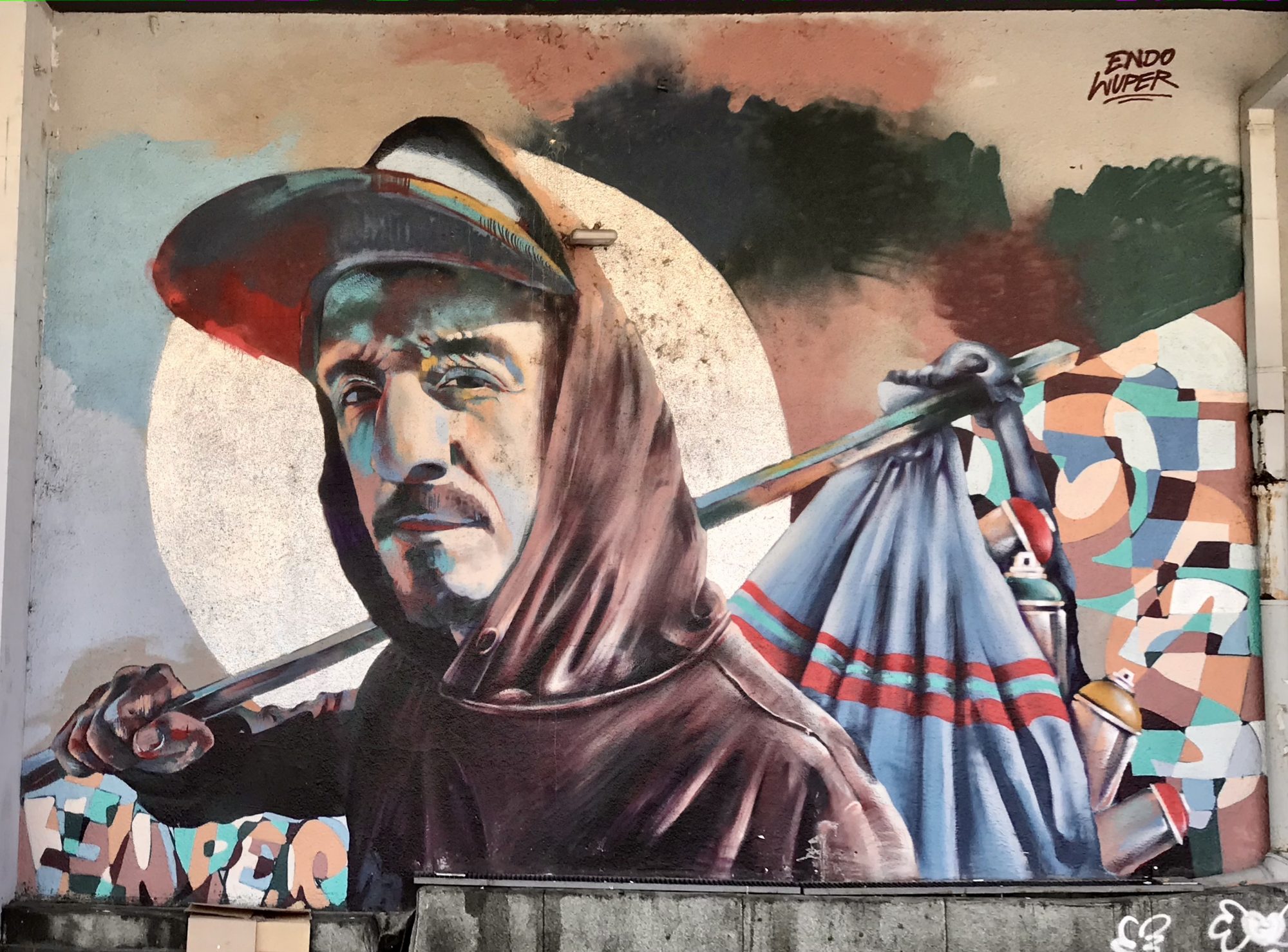 “We smoke like Turks. And like similar sugary desserts,” says Ljiljana when we break for soya lattes midway a four-hour street art walking tour. We’re sitting on one of the numerous Belgrade terraces enjoying the mild early May weather. I’m surprised to hear the admission of similarities to Turks from a Serbian as the hundreds of years of Ottoman rule made Turkey Serbia’s arch enemy.  There are many statues around Belgrade commemorating the independence from the Muslim rule, first as a principality within the Empire in 1817 and full independence in 1867. There’s only one mosque surviving from the 273 that the city used to host.

But Ljiljana is perhaps more informed than a regular citizen: she’s just a dissertation defense away from a PhD in street art from university of Jyvaskyla, in Finland.

An American friend in Abu Dhabi, a Begrade enthusiast, recommended the tour but didn’t know about Ljiljana’s Finnish connection. “I felt so welcome and at home in Finland,” she says. It’s a haven for an introvert. Nobody expects you to hug or chat.”  Sipping our lattes, we joke that perhaps this should become the country’s tourism tagline: “Finland: where introverts feel at home.”

My Airbnb apartment “penthouse with a terrace” has seen better days but it’s centrally located with a big terrace. Like many others in Belgrade, the Soviet style building is nestled between older and more beautiful architecture. My Airbnb host Boris finds me on the street walking his dog. He insists on carrying my heavy suitcase up the few stairs to the elevator; “I’m the man,” he says demandingly, giving me a first glimpse of the robust Serbian masculinity. I’m embarrassed by the big suitcase and feel compelled to explain that I have just started a 3-and-a-half month trip. He seems uninterested and instead shows me the rakia he leaves me as a gift, made by his father. It tastes just like Georgian chacha.

As worn out as the apartment is, I can walk to most parts of the city and I get a kick out of it. To one direction, down the hill, there is the river Sava, to another Kalemadgan Park (from the Turkish words of “fortress” and “battlefield”) with the Belgrade seems green with a lot of parks, but on our tour Ljiljana explains it used to be much more so. Like many cities, Belgrade is destroying its trees in favor of parking lots, which in turn is causing its summer temperatures to rise.

One stop we make is in front of a huge mural by the Italian street artist Blu. “His process is interesting. He goes to new places and drinks with the locals. Absorbs the atmosphere of a city.  And he came up with this,” Ljiljana points out at a huge mural approvingly. It depicts a giant head with an open mouth with apartment buildings as teeth. A hand holds a tree to the open mouth as if a broccoli floret, about to chew and devour it. The mural faces a parking lot.

I’m excited to be in a new city, new country, almost a new region as I haven’t yet visited much of the Balkans. I’m also eager to wrap my head around all its conflicts and complications. But on another walking tour a few days earlier, Stefan, a young history teacher who guides the free 20th century tour three times a week, says we shouldn’t even try. “It’s so complicated, it’ll give you a headache. It gives us a headache!”  One thing becomes clear, however: Serbians feel victimized by the West and NATO for bombing Belgrade during the Kosovo conflict. “We went to Kosovo to protect the Serbians who were massacred,” Stefan declares without a doubt in his voice. There is no mention of the thousands of Kosovans of Albanian origin who Serbians expelled from the region, or of the earlier Serbian-led genocide at Srebrenica.

Stefan stops in front of a bronze statue of a young child against a heart shaped background with the writing “we were just children” in English and Serbian. At the foot of the monument reads “dedicated to the children killed in NATO aggression 1999.”  Stefan tells the heartbreaking story of the particular girl who was killed and depicted in the statue, centrally located in Tašmajdan park with a Serbian orhodox church in the background. The ruins of the bombed Radio Television of Serbia headquarters are close by with another monument commemorating the Serbian journalists who lost their lives in the attack. “I guess NATO bombed it because as a dictator, president Milosevic decided what news was broadcast.”

We also stop in front of a small scale piece, which is several years old and by a local artist called “Streetdog”. It depicts the Statue of Liberty, with her torch dripping sparks, which set her dress on fire. “Unfortunately he was active only a few years,” Ljiljana explains when I ask about him. “We don’t have a lot of street artists doing political commentary.”  After pointing out the piece was done before Trump came to power thus foreseeing the future, she takes the opportunity to explain Serbia’s schizophrenic relationship with the US.  When the Eastern bloc countries had no access to the West, the US was on friendly terms with Yugoslavia and citizens could travel to both Western Europe and Russia. Many East Europeans came to Belgrade to buy rock’n’roll and jazz records.

The 90s wars and the NATO attacks changed everything. While a lot of people emigrated after the war causing a brain drain, Serbians didn’t feel welcome or didn’t want to go to the US anymore. “We felt like our friend had turned her back to us. From our point of view, we felt attacked.”

Realizing it’s a touchy topic, as we’re walking from the children’s war memorial to the Nikola Tesla museum, I still ask Stefan about Milosevic and the Hague war crime trial. He says most Serbians did not look favorably at it. “Although Milosevic was a dictator, we thought it was unfair that nobody else was tried. It was a war and all sides did horrible things.” Many times when he lists the numerous ethnic groups in the Balkans, Stefan mentions Muslims as one of them: Serbs, Croats, Bosnians, Slovenes, Albanians, Muslims. I resist the temptation to ask whether one couldn’t be a Muslim and a Serbian. Interestingly the fascist Croatian movement called Ustashe, who massacred Jews, Serbs and Romas based on Nazi racial ideology which deemed them subhuman, saved Bosnian Muslims who they saw related to Croats. Nazi racial theorists did not see Croats as Slavs but as a Germanic race: arbitary lines drawn with confidence with the help of science.

To add to the headache producing Balkan complications, Tesla, a scientist after whom Belgrade’s airport is named, was born in the mid-19th century in the Austrian empire. His home town is in present day Croatia while he’s ethnically Serbian. Both Croats and Serbs seem to claim him as their own. For similar reasons, Serbia hasn’t acknowledged Kosovo as an independent country because many of the historic Serbian orthodox towns and monasteries are in Kosovo. “It’s Serbian heartland,” Stefan says, and it’s clear the National Museum is keen to prove this with its exhibition.

While there are internal tensions within the Balkans, there are also new conquerors who come again from the East.  On a beautiful sunny day I walk down from the Yugoslav museum to what the map says is Belgrade Waterfront.  It’s a brand new construction taking advantage of the Danube riverfront with cafes and restaurants and bike paths, even sun beds. But it’s all in front of what seems like luxury apartments and a luxury mall, with ads that read “the art of living” and “the art of shopping.” Continuing towards the city center, the riverfront is under construction as are the many high rise buildings. After the construction site, the boardwalk continued with a Buddha Bar and the like. While it is lovely to be able to walk along the river, the project seems also a bit out of place.

The last stop on Ljiljana’s street art tour is in front of a cute piece of a panda looking ghost against a pink background holding a stylized bouquet of flowers. Instead of a flower, one of the stems holds a tiny red heart. Next to it is the text, “Savamalas ghost.” Savamala is a historic, formerly affluent merchant neighborhood by the river but which deteriorated over the years only to be claimed by artists. But on an April night in 2016, many of the buildings were bulldozed and residents who had resisted leaving were dragged out of their homes. The police refused to interfere and later mayor Sinisa Mali’s ex-wife came forth claiming he had confessed he was behind the demolition. It was done to make way for the Belgrade Waterfront luxury development.

Belgrade gave the Emirati development firm Emaar a 99-year lease to develop the waterfront, which I later realize is the reason why Ljiljana keeps saying the Arabs are behind the project. While she admits the mostly industrial waterfront needed to be developed, perhaps luxury malls and residential towers are not what Belgrade needs.

On my last day in Belgrade, I visit the Belgrade Waterfront showroom, not far from “Savamalas ghost.”  It’s in a “turn-of-the-century landmark building” which is “a masterpiece of mixed Baroque and Art Nouveaux architecture” according to the restaurant Salon 1905’s website, which shares the building with the showroom.

I admit I’m not interested in buying a property but would like to hear about the project. Marko, a young man in a suit with impeccable English, shows me the development plans on a huge, wall-mounted touch screen with a 3D view of the luxury apartments for sale. He does it all professionally with a healthy dose of pride, especially when he explains that the concept of luxury hotels and apartments in the same building is new to the region. When I say the concept is quite familiar to me because I live in Abu Dhabi, he continues insisting that perhaps I’d like to buy a place.

He doesn’t fail to mention Louis Vuitton at least three times when explaining the storefront concept and the mall. This time the Eastern conquest of Belgrade is not about Islam, but about luxury shopping.