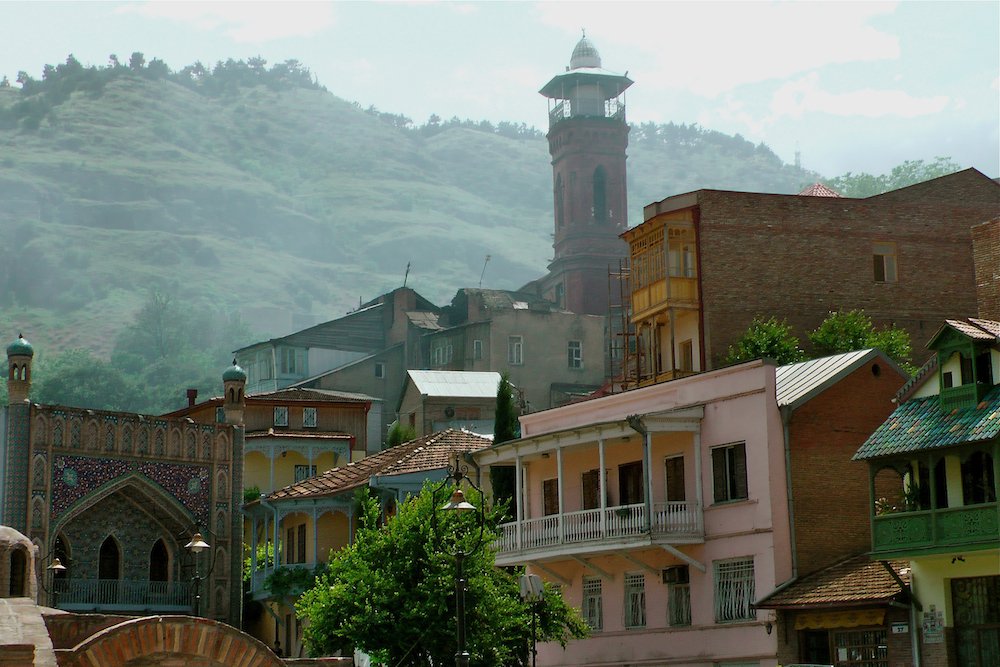 How many capitals in the world are named after hot springs or something to do with bathing? I should know the answer, being the bathhouse traveler I am, but only one name pops immediately to mind: Tbilisi, Georgia.

The ancient capital was named after and built around its sulfur baths, at least according to a legend. But a legend or not, the city actually does get its name from its hot springs: tbili means warm in Georgian.

Several years ago, on my first visit to Tbilisi, I went for a hot July afternoon walk in search of a sulfur bath. I figured it was the perfect time to go: I wanted a deep cleanse after a muddy night at The Tbilisi Open Air Music Festival. I was told I couldn’t miss what I was looking for: it was a beautiful, blue, Persian-looking building.

Sure enough, the building was easy to spot as it looks like nothing surrounding it, as if it belongs to an Islamic country. And there was a distinct smell of eggs in the air: a sure sign of sulfur baths somewhere nearby. Since I was alone, I paid at the entrance to use the public baths for women. The beautiful building’s interior looked like a worn-out Ottoman hammam with high ceilings, dim lighting and tiles that hadn’t been scrubbed for a while. To my disappointment, the public area didn’t have sulfur baths even though I could still smell the eggs; the healing hot water was only available in the private rooms.

But I had nothing to complain about: there was a steam room and I had paid for a scrub and a massage. In the midst of my sweating and enduring both friendly and suspicious stares from the local women, a middle-aged woman with huge, sagging tits came to fetch me (we were all just wearing underwear without bras). She pointed at a marble stone bench and her hand gestures made clear I was to lie on my stomach.

As is customary in these old school Turkish-style bathhouses, the scrub and massage are far from relaxing but closer to what some cultures might call abusive. I, however, get a kick out of them. And so I did from this one, too. As the big-breasted woman scrubbed and pushed and turned me around on the stone bench, I felt like a helpless child receiving a whole lot of tough love and care. There was a fleeting moment of motherly tenderness as well: when the tough mama shampooed my hair. At this moment, we exchanged some basic information and she seemed pleased that I was from Finland. I remember thinking it must have been due to having a common enemy.

If you’re with a group, it’s best to rent a group or family room where you have a private sauna and a naturally hot pool of sulfur water. All of the Tbilisi bathhouses have these. This is what I’ve done during my following visits to Tbilisi, though last summer I splurged and got a private room all to myself.

This one was in the bathhouse number 5, one of the only five still operating bathhouses in the city. When Tbilisi was a popular silk route station, according to The Caucasian Challenge, there were more than sixty to choose from and in the time of the Russian Empire, when Pushkin and other famous writers liked to soak in the city’s healing waters, there were still more than 10.

Entering bathhouse Nr. 5, you go down the stairs to the basement level and are immediately hit in the face with humidity and that same smell that lingers outside in this area of Tbilisi’s old town. You pay at the entrance according to the room choice and get two towels. They’ll ask if you’d also like tea in the room, which I recommend: it’s part of the age-old ritual. I also recommend paying for a few extra towels: they’re really thin and the size of a stamp. You’ll especially need extras if you’re wearing one to dip in the sulfur pool in the company of others.

Don’t be thrown off by what might seem like unfriendly staff in a country that’s otherwise so hospitable. My theory is that it’s just part of the bathhouse culture: regardless where in the vast, former Ottoman region you go to bathe, you get the same rough and tough, sometimes hurried treatment. I recommend going with the flow and considering it part of the ritual, or as a kind of a tough love, as I prefer to do. Who knows, perhaps the customary roughness has cemented into place to compensate the inevitable intimacy of being scrubbed and bathing with others.

Though the smell of sulfur isn’t the best (it’ll stick a while on your skin, too) it’s all worth it for how amazing you feel after. It’s particularly nice after a long flight or a road trip as the Vogue writer visiting Tbilisi’s fashion week recently found out. Oddly enough, instead of leaving you feeling knocked out and useless for the rest of the day, it relaxes and rejuvenates you at the same time.

After your bath, it’s nice to take a slow walk in the recently renovated area around the bathhouses. There’s a path that takes you behind the Persian looking bathhouse, and after turning a sharp corner, you’ll be surprised to see waterfalls. Right there in the middle of the city; this is just one of the many pleasant surprises Tbilisi has in store for you.