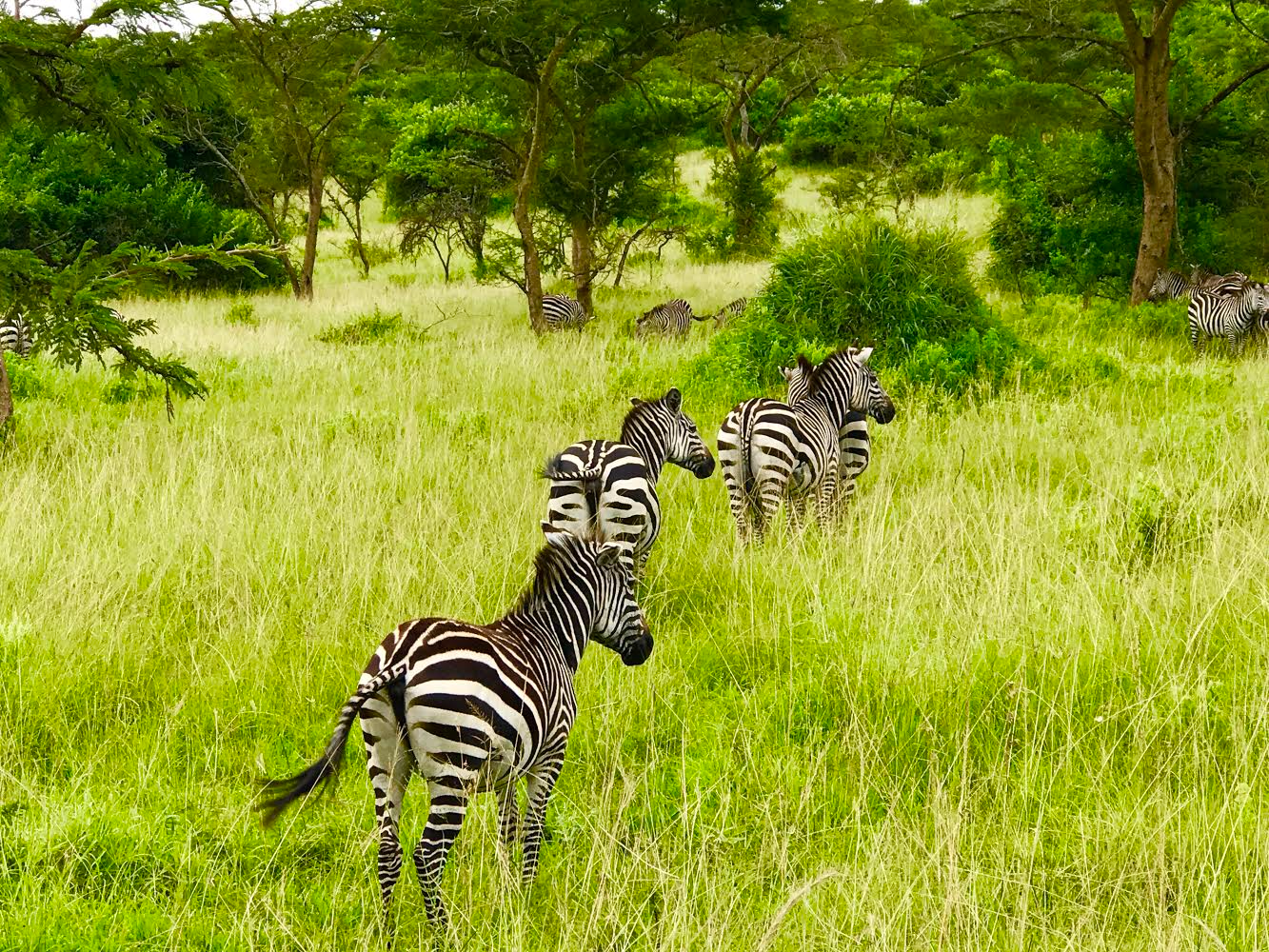 I had already visited Uganda once, but that time I never went on a game drive. This might sound strange as safari is one of the biggest reasons people travel to Africa, but I was happy just visiting my friends, who had recently moved to Uganda, and going road tripping with them and Danny. I was also happy just being in a new place, soaking in its feel and vibe, taste its food and beer, meet its people; one of my favorite things to do in the world.

Instead of a safari, we spent some time the Ssese Islands on Lake Victoria and also visited Rwanda. On our way bussing it to Rwanda, we visited Lake Bunyonyi at the altitude of almost 2 kilometers, and close to the Rwandese border. If you ever have a chance to go, you’ll understand why I wasn’t even missing a game drive: it’s one of my favorite spots in the world, serene, beautiful, relaxing.  You could say that in many ways it’s the opposite of New York, where I live.  I could have never imagined such a place exists in Uganda, though I’m not entirely sure what I had imagined before visiting. What I know for certain is that it wasn’t such lushness, beauty and mountain lakes, which made me not even care about seeing lions, giraffes and elephants.

But then again, on my second trip to Uganda, I got it.  I got all the excitement people have about safaris and game drives and it didn’t take long to make me a convert.  We were just driving towards our next destination, Fort Portal, north of Lake Bunyonyi (yes I went back) on a road that goes through the Queen Elizabeth National Park.  First a pack of elephants crossed the road and we stopped and took pictures as they seemed to pose for us with antelopes. I was blown away already.  As we continued, the landscape started morphing into a savannah.  Then I was sold for good.

Our friend Peter, who’s from Belgium but has lived in Eastern Africa for about 20 years, was laughing at me as I was basically hanging out the window with excitement at the sight of the savannah.  Looking back, it’s what impressed me most about the game drives. I’m not entirely sure why, but I think it has to do with all those nature documentaries I used to watch on TV as a child. And the narrator’s soft and drowsy voice, speaking slowly, articulating every word and sometimes almost whispering, as if he was there with the camera crew and didn’t dare wake up the sleeping lions.  In my memory at least, half of these shows seemed to be about the savannah and seeing one in real life at last was an unforgettable moment.

What made the game drive portion of the trip extra special was the lodge we stayed at in the National Park: the Murchison River Lodge. It’s in a stunning spot by the River Nile and spreads out over a huge piece of land. The dining area and bar have an amazing view of the river and there are tiny paths that lead to various cabins and permanent safari tents with beds and mosquito nets.  At night, the paths are lit by lanterns. As we arrived, we were given a prep talk on how to behave if at night there is a hippo on the path to our tent.  This very well might happen as there are tons of hippos in the river (you hear them all the time) and at night they come to dry land.  Apparently the trick is to, 1) not to point your flashlight in the hippo’s eyes and 2) never to block the hippo’s access to the water.  Easy enough, right?  Though luckily we never had to practice our hippo passing skills.

For someone who grew up in Finland, having several kinds of monkeys running on the premises, and hippos in front of you, just chilling in the river and roaring away, is an experience like nothing else.  Call it exoticization, but exotic it is.  I remember growing up, our bank’s mascot was a hippo called Henri.  And because of that, my brother, whose name is Henri, still, decades later, has the beloved nickname “Hippo”.  In Finland it didn’t mean much, the word hippo having lost its connection to the animal, but I was thinking about it, chilling in a hammock, observing the hippos bathing the river, and realizing how far I had traveled.And how much other cultures use images of African wildlife, be it for ads or sports team mascots, especially of the Eastern African savannah.

The actual game drive in the Murchison Falls National Park was as thrilling as it sounds like.  I’m not a morning person, but the torture of getting up at 4.30 to have a light breakfast, cross the river and reach the park by sunrise, when the wildlife is at its most active, was more than worth it. We saw giraffes, elephants, buffaloes, different kinds of antelopes, even a lion and a rare savannah monkey.  The next day we took a river safari up to the water falls the park gets its name from and saw more elephants, countless hippos, crocodiles, baboons, many different kinds of monkeys and beautiful birds.  With all that wildlife excitement, still my favorite was the savannah itself.  Standing in the car, feeling the breeze on my face and looking at the savannah in the soft morning sunlight, dotted by antelopes made an enduring memory:  I’ve never felt freer and never seen something so rugged yet delicate at the same time.