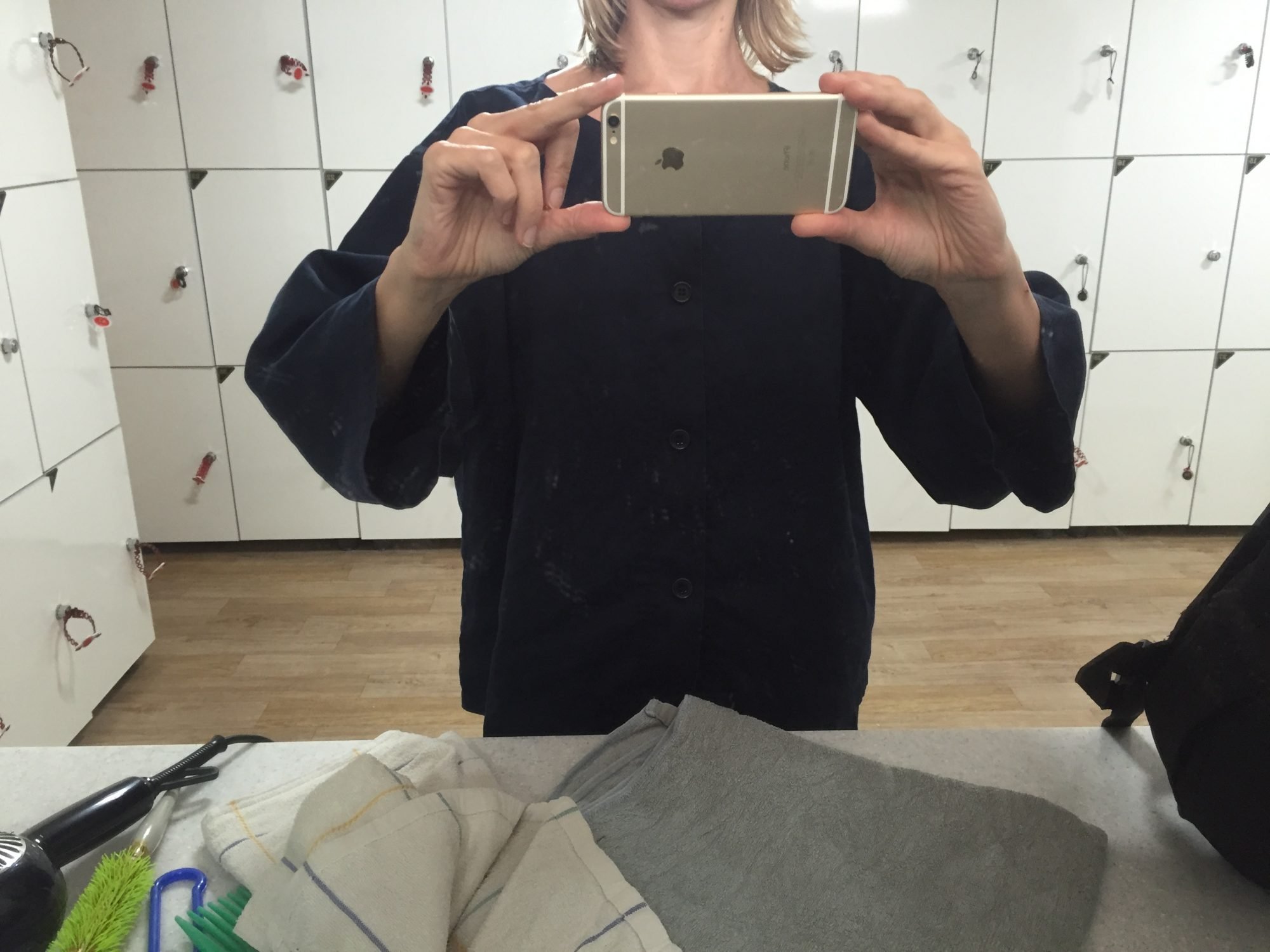 The white towel, heavy on my shoulders, gets cold too fast again.  But the steaming water is so close that I cannot get too annoyed, and besides, I’m far too relaxed for impatient thoughts.  So I embrace the task at hand and once again wring the towel dry and dip it in the steaming hot seawater, which smells like tea because of the huge sack of herbs soaking in the same rectangular pool in the middle of the room.

The wet, dark blue unisex pyjamas feel cold against my skin making my whole body yearn for the warmness of the newly heated towel.  But first, after I manage to fish the towel out of the water, I have to wait long enough for it to cool on the wooden platform next to me so that it won’t burn me.  The window for it to be usable on my shoulders before it cools down too much is just a few minutes.  What a laborsome sauna.

The room would probably fit about 12 people and feels a bit too big for just me. I can imagine the work involved to be more fun in a group and listen to the cheerful, cozy chatter of the big groups from the neighboring rooms.  The pyjamas enable mixed groups bathing together, which probably adds to the general gaiety and excitement.  But I can’t help but wonder whether they have soju with them, too, to lift the spirits.  We would in Finland for sure.

Though the towel does its job for such a short amount of time each round, its effects are noticeable. I feel the vigorous blood circulation blushing my cheeks and admit that the long trek to find the remote place was all worth it.

It had begun with me spotting a small boxed notice in the Lonely Planet travel guide, which I had only been skimming for bits and pieces of necessary information, immersed in my Murakami book instead.  The notice said that there was a very special seawater sauna in southwestern Korea.  I had never heard of such a thing and immediately starting looking into it.

No information online, in English at least, but the guidebook had the address. I quickly calculated I could possibly make it there within my remaining travel days. I set on the journey, which involved a train ride via Seoul from the other side of South Korea, a bus and a taxi, and a friendly English-speaking brother and a sister, who, in a café close to my guesthouse in Mokpo, wrote on a piece of paper Korean instructions for the taxi driver.  They had a cute kitten in the coffee shop, who had mysteriously lost his ability to walk to the puzzlement of all vets they had taken him to see.  It seemed all so very Muramaki, it made my head spin.

The instructions in English came in handy as the taxi driver spoke no English and the sauna was a long way still from the small bus station of Hampyong.  Doubt crept into my mind about whether this place really exists as we drove through a sleepy countryside.  I didn’t even want to think about how I would get back.

We arrived at an unassuming looking, L-shaped low building right next to the sea.  It was so quiet I could only really hear birds chirping to the rays of the spring sun. My trip there had taken longer than I had expected and I was worried I had missed the opening hours.  After some difficulty, I found an entrance with a woman who seemed to work there.

The skinny, middle-aged woman spoke no English and apparently had no smiles to spare either.  She said something harshly but I had no idea what.  Interpreting her body language and the waving of her arm towards another entrance, I thought I was in the wrong place or perhaps that the sauna was closed.  But the other entrance only led to the dressing room.

Reluctantly I returned to the woman and now she sold me a ticket, and handed me a towel and pajamas.  Tough women guarding bathhouses seems to be a staple around the world.  I assume this one was annoyed having to deal with a foreigner.

The dressing room was empty and spare.  I left my stuff in a locker, put on the pyjamas, and wandered into the corridor in hopes of finding out how to proceed. Luckily a much cheerier man appeared out of nowhere, who gave me another towel and showed with exaggerated hand gestures how to use the towel.  He then led me through the corridor to the empty, barren room with only wooden mats surrounding a rectangular pool of steaming water.

As I listen to the big groups of people in the other rooms, I thank my luck having arrived in time before the huge tour bus came, the same kind I had seen arriving at the national park entrance as if an army of hikers.  Power in numbers seems to be the Korean motto.

My appearance at the shower room causes, understandably, quite a stir.  The room is full of tiny, wrinkled women sitting on the bathroom floor, washing the seawater off and staring at me.  Apparently the tour bus had been full of retirees.

I try to proceed as if it was perfectly normal that a foreigner was taking off her saltwater soaked pajamas and shower.  The same scene is repeated in the dressing room, where many pairs of eyes are locked on my body, staring at me from the floor where they all sit while drying and dressing up.  Even though I realize this was the way to do it in Korea, I can’t bring myself to dress so uncomfortably and end up towering over the elderly women, who are all examining especially my breasts and pubic hair without any attempt to hide it. The situation is so absurd – again as if it was imagined by Murakami – that I can’t help but laugh, which leads us all to share laughs and a few women to point at their hanging breasts and then mine with cheerful chatter and smiles.

Finally a connection: what bathing with strangers is all about.