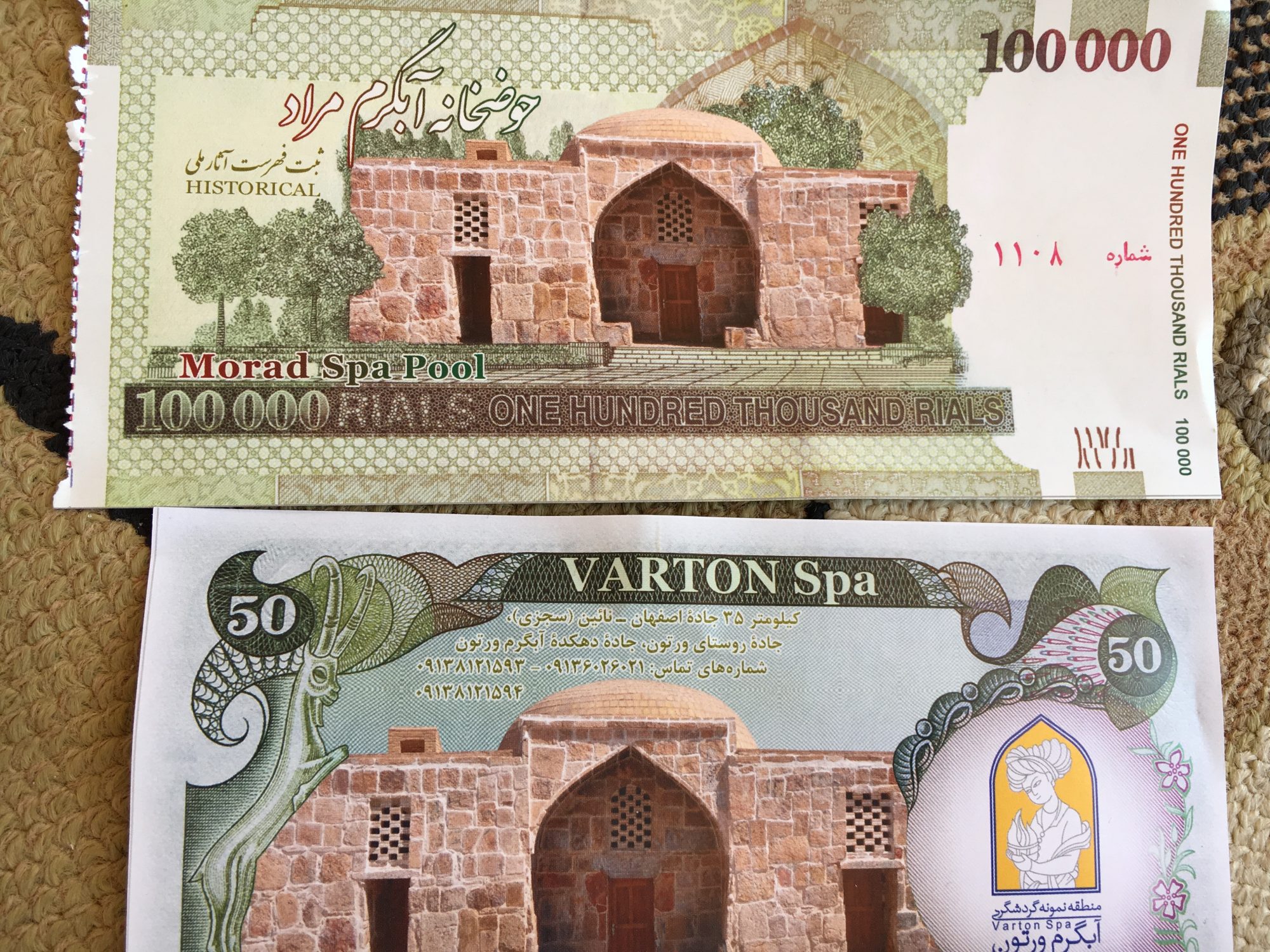 A vivacious, middle-aged woman in a swim cap is just finishing a Farsi song with her mother, cousin and our guide Miriam.  The small room is filled with their proud, strong voices, which echo in the tiled dome above us.  I’m immersed in the moment, marveling at my luck for being there, when Miriam suddenly turns and translates the ladies’ request: “Could you sing a song in Finnish?”

Except for the Isfahani Miriam, whom I had met on my first trip to Iran, the women are all from Tehran.  They make a point of stopping at the hot springs whenever they come to Isfahan. On an isolated hill 15 kilometers from the main road, the more than a 100-years-old bathhouse had been forgotten since the 1979 revolution, re-opening about ten years ago.  The spring’s healing properties have to do with its iron, which especially the 80-something mother enjoys: the rust-colored water eases her joint pain.

My friend and I look at each other in disbelief.  We’re asked to sing a Finnish song in a bathhouse in Iran? I suggest a traditional song from Eastern Finland, the fast pace of which makes the women laugh.  After the initial hesitation, we, too, enjoy hearing our voices raise up to the dome.  But then comes the next request: “Sing the national anthem,” which they, in broken English, keep calling “the international song.”

They begin with Iran’s national anthem.  The four of them sing again with force, but this time also with fervor.  Looking at their earnest faces, I think about how Iran had made me fall in love with its graceful beauty and hospitality.  No wonder they sing with passion.

I’m happy to see Miriam partake, too, for until now, she has not had much good to say about her country.

Miriam’s biggest dream is to move to Canada. After my last trip, she kept bombarding me for expatriation advice as if I was a Canadian immigration official.  Showing me Isfahan, she shrugged her shoulders, short from rolling her eyes, while I was left speechless by the city’s historical sights.  I felt bad I couldn’t help her, and also ambivalent because I was telling everyone about Iran’s treasures for the traveler.

On the way to the bathhouse, she asked: “Do you feel pity for us?” I was lost in thought wondering why she was driving so slowly on the highway that the trucks were passing us.  Her question threw me off:  “No, of course not!”

But Miriam seemed to think that pity would be an appropriate reaction.  In her mid-thirties and married for more than 15 years to a man not of her choosing, she craved all the freedoms we have in the West.  Especially sexual freedom.  I understood her and would probably feel the same had I been born in Iran, and yet I heard myself explain that a lot of people feel lost and unhappy in the midst of their freedom.

Who was speaking?  I didn’t recognize myself.

I wasn’t merely trying to make her feel better.  Miriam’s uncomplicated admiration for the West made me uneasy: it echoed a common Western attitude I didn’t appreciate. Yet my protest seemed out of place.

I feel the four women’s identical, insistent stare.  There’s no getting away with it: we have to sing Finland’s national anthem.

As we sing the both operatic and solemn song, I cannot help but feel pride for my distant homeland, where I haven’t lived in decades. The midday light peering through from the top of the dome and reflecting off the water looks as if it’s dancing on the shadowy, tiled wall. The movement is beautiful and hypnotic, a seemingly auspicious sign.  And I had always thought I didn’t like singing patriotic songs.

Pleased with our performance, the four women chat in Farsi and laugh.  This is the happiest I’ve seen Miriam. The Tehrani ladies’ joyfulness and vitality must be infectious. Or perhaps the singing got her to tap into a dormant pride in her home culture, if not country.

We’re quiet driving back to Isfahan. I’m travel happy and feeling relaxed from the minerals in the hot spring.  There are only a few thoughts in my otherwise vacant mind. I think about how national pride – a potentially dangerous feeling – can also be healing.  And I think about the intimate power of sharing a bath with strangers.