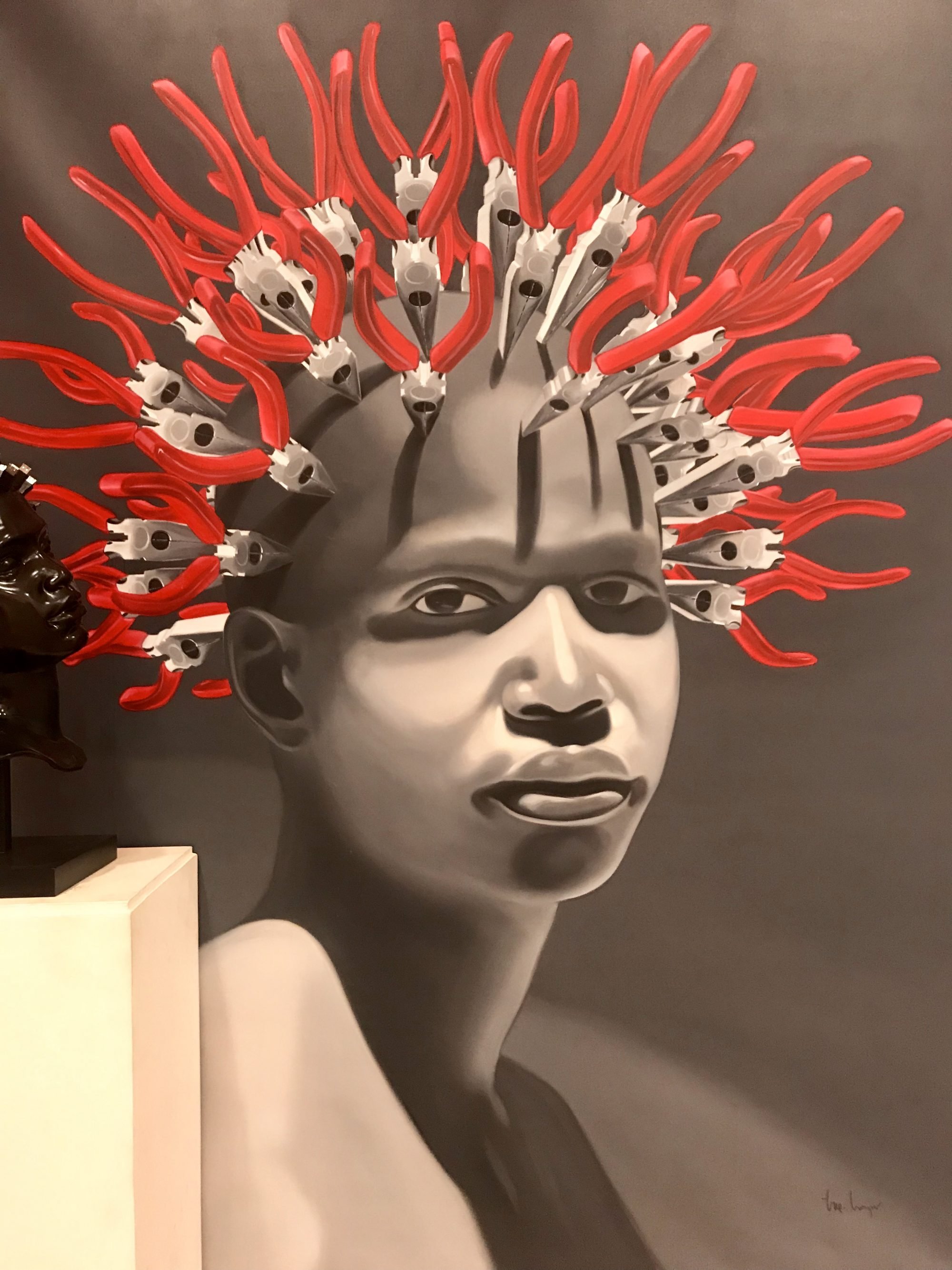 She’s on the third floor, next to a statue from Cameroon.

She’s young and beautiful, just a girl really.  Her expression is difficult to interpret.

We pass a loudly chatting group of Senegalese women, all dressed in a medley of primary colors. I wish I’d understand what they’re saying, what they think of the recently opened first museum of black civilization in the world.  The museum is in their capital, Dakar, paid for with  $34,000,000 of China Aid.

The elliptical building dominates the empty square in front of it.  It reminds me of European state funded museums, like those in my home country of Finland, oozing authority but stifling.

The shape imitates the walls of Great Zimbabwe, the iron age abandoned city with imposing stone structures, which gives the modern day nation its name. When the country was still called Rhodesia, named after the British miner and businessman Cecil. B. Rhodes, the colonizers came up with different theories of who had built the structure. Something so sophisticated couldn’t have been built by Africans, they reasoned.

A baobab tree sculpture welcomes the visitors to the big open space on the ground floor.

It’s an iconic image of Africa, but will most Europeans and North Americans associate it with Lion King rather than with its importance to African cultures?

We wander around the massive 14,000 square meter museum.

It seems there is more space than artefacts.

“There was no curator,” the ambassador of Luxembourg says when I asked her what she thought.  She had attended the opening ceremony.

Yet the tall, white walls draw attention to fragments of impressive history.

An exhibition of the roots of humanity in East Africa.  A long, curved wall where you can follow its evolution.

Pictures of the castles of Benin, the mosques of Mali.

All that history printed on foam boards not worthy of the past they convey to us.

The evidence of those old kingdoms scattered all over the civilized world.

“Up to 95 percent of Africa’s cultural heritage is held outside Africa by major museums. France alone holds 90,000 sub-Saharan African objects in its museums,” reports The New York Times.

Luckily for Musée des civilisations noires, France loaned some artifacts for the opening.

They’re going to demand them back, too.

I find my friend looking at a sprawling installation piece with sand on the floor and human size matches sticking out of it. They’re burnt to a different degree.

Two white matchboxes stand in the background with the text “Le Laboratoire Déberlinisation” underneath a classical European style building facade. The columns look like bars. Behind them is the map of the African continent.

“Why does it mention Berlin?” my friend asks.

“Probably for the late 19th century Berlin Conference where European nations divided Africa between them. Without any representatives from African nations present.”

The higher we go, the more there is.

It’s strong and vibrant and thought-provoking, mostly contemporary art from the last Dakar Biennale and from the African diaspora.

It’s as if the museum wants to show the visitor the magnificent but looted past, histories of kingdoms not deemed worthy to include in the colonizing continent’s school books, ending with the feisty spirit that despite all hasn’t been stifled.

We spend most of our time on the third floor.  That’s where I meet her.

She stares at me with a blank stare. Or is it bold rather? Confrontational? Like she knows something I don’t and she’s not going to tell me either.

The light reflects off her flawless skin, but only in hues of black and white.

It’s a stark contrast to the intense red of her hair.

But instead of hair, she has red pliers sticking out of her head. Still, when looking at her from afar, the pliers look like Topsy’s hair in Uncle Tom’s Cabin, “braided into little tails, which stuck out in every direction.”  Like “Crazy Eyes” Suzanne’s in Orange is the New Black.

Or is it a reminder of pain, of a past taken from her?

The 2018 painting’s name is “Redresseurs,” by a Cuban art collective The Merger.

My French is so bad I have to check later in the dictionary what it means. Finding out soothes the uneasiness the museum caused a bit.

Rectifiers. A rectifier is “a device that converts alternating current into direct current.” Or “a hair straightener.” Perhaps also a “revenger,” a “judge,” or “a righter of wrongs.”