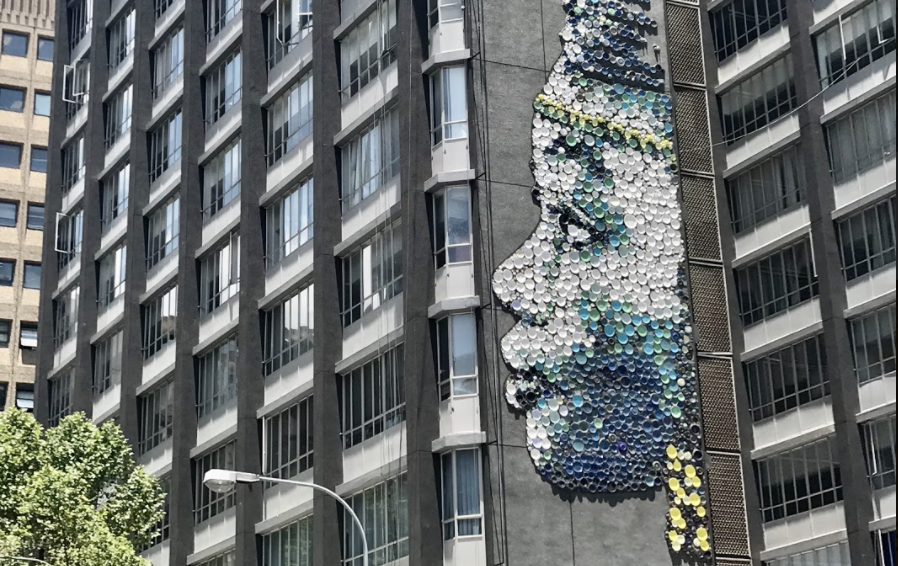 On my first night in Johannesburg, I’m in an Uber heading downtown. My driver is a tall, quiet 50-something local man.  He picked me up at my guesthouse called Melvilla, in a leafy northern suburb, which I had heard was safe enough to walk around during the day.  I was told nowhere in Joburg was safe to walk after dark.  Especially downtown. When I asked about it from a native Joburgian I met in Mozambique, he looked at me puzzled:  “I have never in my life walked anywhere in Johannesburg.”

Closer to downtown the driver starts looking at my destination on his smartphone GPS a bit closer. “Where are you going exactly?” he asks me with a worried look on his face. “It’s a hostel.  I’m picking up my friend from there.” “It’s not a good neighborhood. I don’t want to stop there for long. Ask your friend to be ready.”

A friend is a stretch, however.  I’m on my way to meet Dalit, a forty something divorced mother of two from Israel who has lived in South Africa a long time. I met her on Couchsurfing, a travelers’ networking site.  As I was traveling solo, she invited me to join her and her friends for a night of dancing. “Perfect for a Saturday night,” I thought, imagining some cutting edge music Joburg is famous for.  Dalit looked like someone who might be in the know of such places.  But she also asked me to co-ordinate with Pedro, her Brazilian Tinder date, to share a ride.  I thought it was so hilarious she asked me to pick up her date that I agreed.

As we’re approaching downtown, I start understanding the driver’s hesitation.  The streets are desolate. Most buildings look abandoned with only a handful of homeless people on pieces of cardboard and drug addicts on the streets.

When we arrive in front of the hostel, a plain run-down building of four floors like the rest on the block, Pedro is nowhere in sight. The driver asks me to hurry him again, “I need to keep the engine running in case we need to drive away fast.”

After a minute or two, which the driver’s nervousness makes feel much longer, I finally see a tall, muscular man struggling to get the bars on the hostel door open from the inside. At the same time someone with a yellow vest appears from the darkness and approaches the car.  The Uber driver is now shaking with fear and shouts at the approaching man, “Don’t come closer! Leave me alone!”

When I later told the story to someone, he said the Uber driver might have been afraid of metered taxi drivers who have been attacking Uber drivers.  But Pedro’s hostel corner didn’t look like a place for taxis.  I also heard that yellow vests had become a common disguise for criminals, a makeshift uniform of authority in a city where many are so poor crime flourishes.

On the back seat, Pedro and I find out we have a lot in common.  We are in Joburg exactly for the same five days and we’re both professors: Pedro teaches linguistics at a university in a small city in Brazil.  After a moment of silence, he says in his carefully annunciated English with mercurial changes in intonation: “Did I tell you about my other professions?” Staring in front of me, in a car with a handsome but a bit odd stranger, I imagine what they could be — a serial killer or a stripper maybe?  But Pedro says, “I’m also a magician and a hypnotist.”

We have trouble finding Dalit’s house but finally after a 45-minute ride arrive at a peaceful gated community of simple two-storey houses and plenty of greenery. Dalit is as strikingly skinny and beautiful as in her profile pictures and she introduces us to her two friends waiting in her livingroom.

The friends are plainer than her but as friendly and talkative. They’re all Jewish, divorced or never married, speaking in a strong South African accent, adding a “yaa” in almost every sentence. Strong women ready for a Saturday night out while the kids are with the ex-husbands.  Their no nonsense attitude reminds me of Jewish women I know in New York and I feel instantly at home.

After removing the children’s seats we pile into Dalit’s seven seater to go pick up Victoria.  The whole way the three women gossip about Ann.  None of them like her husband and there is uncertainty whether she would join us and whether it’s her husband who doesn’t allow her. Pedro and I listen in silence.

We pull over in front of a suburban house and Victoria appears. She’s a fragile looking brunette in a mini skirt, ill-fitting high heels and fake eyelashes, one of which is not quite glued properly. She too is Jewish, a mother of three, recently divorced and a walking embodiment of a deer in headlights.

I start having doubts about the edgy music venue.

With five women and Pedro in the car with her, Dalit, speaking a mile a minute, turns into an empty parking lot of a mall.  She doesn’t seem to think she’s on a date.  She parks and points at a chain restaurant serving Mediterranean food: “We’ll have dinner there. But first we’ll smoke some hash before going in, OK?” Hash has just been legalized in South Africa, she explains.

A car approaches ours and parks right next to us. A woman with long curly hair rolls down the window.  She’s Elizabeth, a teacher like all the other women except for one accountant. I instantly like her feisty energy.  She climbs into Dalit’s car, sits next to me and says slowly, pronouncing every word carefully, “Do you speak English”?  Dalit explains that her previous couchsurfer didn’t speak much English and had not reacted well to the hash.

As I look at the five women chatting and smoking in the bleak parking lot and at Pedro the magician looking a bit lost, I feel like laughing out loud. I didn’t get a cutting edge music club, but in exchange I’m in a David Lynch movie.

The restaurant is exactly like all chain restaurants in a mall: decorated in furniture and colors that you’re not supposed to notice. Pedro sits at the head of the table, next to Dalit and me. I can tell that Dalit isn’t exactly smitten with her Tinder date. Perhaps she too thinks he’s a bit off beat, masculine good looks but with something child-like about him.

We have barely finished dinner, when Pedro says, “Would you like to see a magic trick?” Slowly he takes a coin from his pocket, which in a few seconds appears behind Victoria’s ear.  She’s shrieking with excitement.

After a few more magic tricks and puffs of hash in Dalit’s car, we move to the dance bar, located at the other end of the same mall and the last bits of my dream of attending a cutting edge music show evaporate. As we walk into the racecar themed sport bar, I think I might as well have been at a strip mall sports bar somewhere in New Jersey.

The first room of the bar has high ceilings, red walls, car parts and motorcycles and a bar counter. An old Bon Jovi track blasts. I take a deep breath and escape to the bathroom. The women’s bathroom is signposted with a photo of an attractive blond woman with big boobs in a Halloween cop costume complete with a miniskirt, handcuffs and a baton. Men’s bathroom has a photo of a racer’s back. He’s on top of his motorcycle pulling down his outfit from his crotch.

I come out to find nobody I know at the bar but locate them in another, much bigger and darker room with a bar counter, tables and a dance floor full of people. Dalit, Pedro and the other ladies are all dancing.

Most of the crowd is much younger than any of us, but this doesn’t seem to bother the divorced ladies. They’re full on enjoying their night out. I go to the bar, order a cider and try to get over the shock of where I have ended up.

There is only one black person in the whole bar that seems to hold up to two hundred people. I realize I’ve ended up in a strange pocket of Northeast Johannesburg but I still wonder about the history of segregation and its seemingly voluntary continuation.  Then again the bar crowd didn’t seem exactly liberal.  I also wonder why the almost middle aged Jewish ladies would choose a racecar bar as their Saturday night destination.

When I get another drink at the bar, Victoria rushes to me and asks me to get her a tequila shot so she can avoid the line. “I’ll pay for it,” she says and bats her long eyelashes, the left one about to fall off.  In about ten minutes, she’s not feeling so well and two of the ladies chaperone her to get some fresh air. Dalit rolls her eyes and says, “she always needs babysitting. It’s just for attention.”

The night includes some more hash smoking in the parked car and discussions of marriages desired and destroyed.

Pedro continues his magic tricks at a standing table next to the dance floor.  I wonder why he insists performing the tricks in a loud club: is he too in need of attention? But he’s also so professional he pulls off miming the necessary spoken parts, which would be impossible to hear over the loud 90s music.  As magical as his tricks is his ability to pull coins, ribbons and balloons from the pockets of his impossibly tight jeans.

Victoria and Elena, the youngest of the crew, find some admirers on the dance floor. They’re regular looking young men in jeans, one color T-shirts and caps. The mating ritual I witness could as well take place in Copenhagen, Minneapolis or Sydney.

It’s late and I’m ready to head back to my guesthouse but Pedro wants to take Dalit’s offer and first go back to her house to call an Uber. He’s in denial about his date. Dalit keeps talking nonstop on the way back and at one point runs a red light. “Nobody stops at red lights at night in Johannesburg. It’s too dangerous,” she says lighting a cigarette.

Pedro’s attempts at prolonging the night don’t work: Dalit is tired and uninterested. As I’m opening the Uber app, Pedro again suggests that he is dropped off first.  Luckily Dalit gets angry and says, “you’re a man, Piia is a woman and this is Johannesburg at night. You will drop Piia off first.”

“That was such a weird night,” I tell Pedro in the car. “But delightful.” Pedro nods, “Yes it was. And none of my friends will believe that I went out with six women and home alone.”

I’m not sure if it was a hint but nevertheless pretend not to notice.  Yet Pedro and I hang out a few times the following days. One night he invites me to dinner at his run down hostel to eat fish fingers. I accept the invitation because it’s as absurd as the David Lynch night in the suburbs.  I bring the club soda since he doesn’t drink. We laugh about the ladies being afraid of hypnosis. I’m about to volunteer when Richard from Seattle, a retiree who has been on a snake spotting expedition, joins us and the evening includes more magic tricks and wonderment.

Later Pedro sends me pictures from his trip around South Africa with him in every picture. When I point this out, he responds, “Haha, yes, I crave attention. That’s why I always wanted to be a magician.”