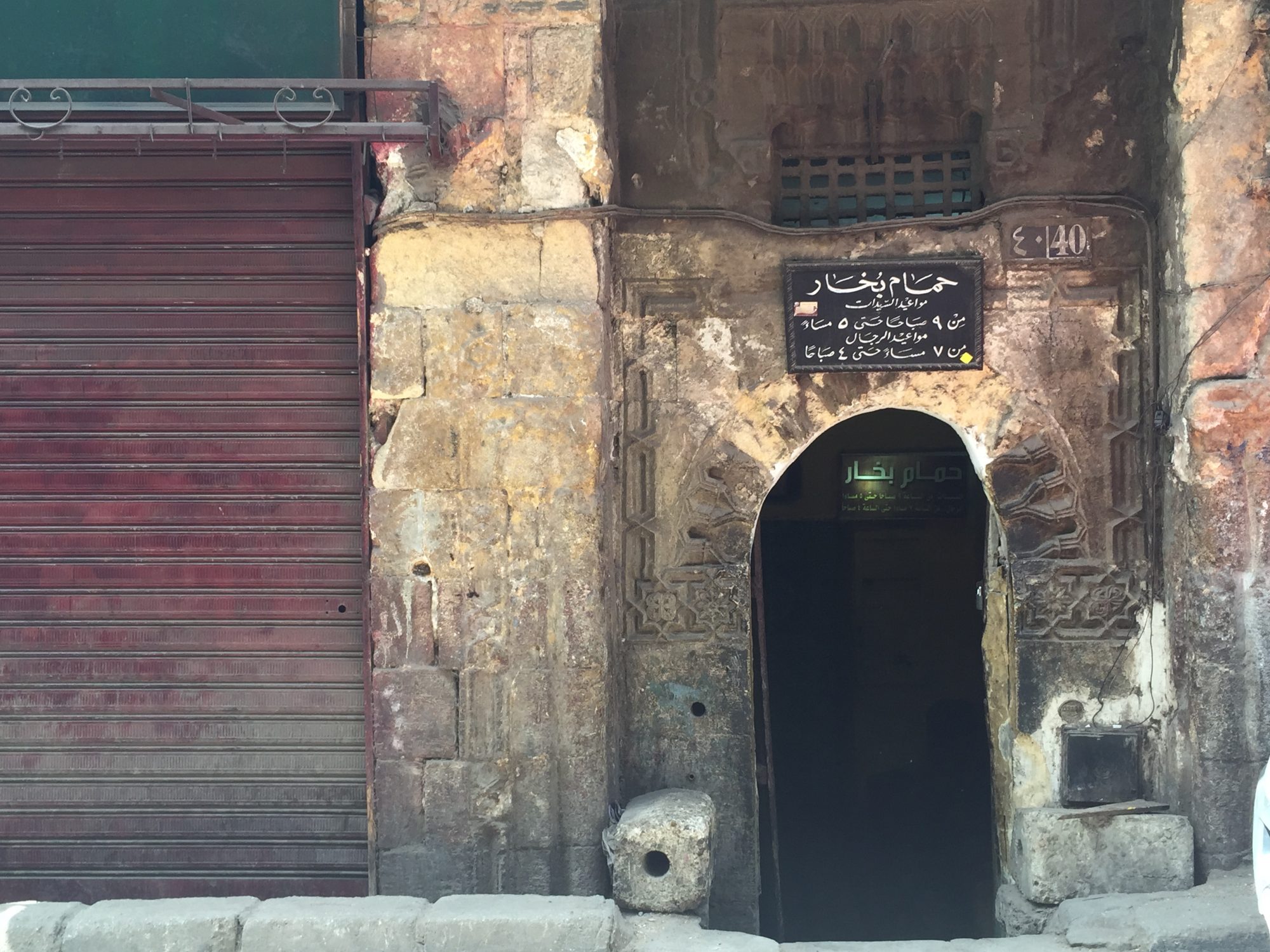 One of my favorite things to do in a new city is to get naked with strange women and bathe. Well, that’s how some people have described it to me, but in my mind it’s the most normal thing. This probably has to do with me being from Finland, where nudity and going to sauna in the company of others are as natural as breathing.  Lucky for me, public baths have a long history also in my favorite travel region – The Middle East and the Caucasus – so while on the road, I find plenty of opportunities to take off my clothes, sweat and get scrubbed, while learning a whole lot about local life.

A few years ago I went to bathe in Cairo.  I had been to the megacity before but due to the circumstances (right after the 2013 coup/revolution), I didn’t manage to find my way to a bathhouse.  This time I was determined to correct my mistake and emailed my contacts in Egypt way before arriving for advice.  Not to waste their time or mine, I made it clear that I wasn’t talking about a tourist spa, but about a bathhouse where local women still went to bathe, either for the steam, the social ritual or the necessity because they didn’t have bathing facilities at home. Or all of the above.

My friends got it right away and suggested one in the old medieval or Islamic Cairo and even let me know how to find it with the metro. The day I was planning to visit the bathhouse, I inadvertently shocked my charismatic, historic hotel’s owners, who, as usual, were inquiring about my plan for the day: being upper class, educated and well traveled Egyptians, they would never consider visiting a public bathhouse. They in fact didn’t even know this one existed less than 2 km away from their hotel, The Windsor, which the family had owned since the 60s and where they currently lived.

I’ve visited countless bathhouses on my travels, so as I entered this one in Cairo, I could tell right away it was the real deal.  A long, narrow, carless street with various handicraft and repair shops took me there.  No tourists in sight.  As I spotted the address, I could see the Ottoman style domes protruding from the roof, so typical of bathhouses all through the Middle East.  Then I entered the unassuming but beautiful door.  The room was cluttered, full of cigarette smoke and loud with women’s voices.  One sign that this was not a tourist place was the immediate spectacle I became – obviously the bathhouse did not attract a lot of foreigners.

The initial interaction was similar to most bathhouses: a pushy young lady wanted to get down to business. I picked a scrub as a treatment since massage wasn’t available.  We agreed on the price. This was all done in a mixture of a few words of English and Arabic, with a healthy helping of sign language.  Next I was hurriedly ushered – as if the steam was not going to wait for me – to a narrow corridor, with a platform or a large, elevated bed of sorts on one side, where I was to undress.  No curtains or benches or lockers.  So I did and left my clothes and toiletries in a bundle on the platform, wearing only my underwear, like the other women.

Then the pushy young lady – regardless of place or culture, there always is a pushy lady – led me to the steam room.  Seen from the inside, the ceiling domes looked tired and worn out, with strips of white paint ready to fall off, but the room was not without its charm.  In fact, I enjoyed the touch of history in there, as I did in the hotel I was staying.

As soon as I had entered, I became the center of attention of the 5 or 6 women of all ages in the small steam room.  There was a pool full of boiling water in the shape and size of a deep bathtub, which seemed to be the source of the steam – the first I’ve ever seen. I wanted to move a little further away from the doorway, which caused a collective scream as the women all seemed to think I was going to dip into the boiling water.  But no: I just wanted a little more room and after some sign language and shared laughs, we were all relaxing.

In a few moments, the pushy lady came into the steam room and signaled that it was time for my scrub.  She did it forcefully and thoroughly, proudly showing me the dead skin being exfoliated.  Meanwhile I was observing two women having something that looked like blood red clay applied to their skin. I pointed at it and then at myself to ask to have the same treatment – I wanted to try it as well. I got a long answer in Arabic and a hand signal for more money. I nodded and after agreeing on the price – about $3 –the pushy lady came back with a small plastic bag showing what looked like grey powder, which apparently turned blood red with contact with water.

As nothing was particularly relaxing at the hands of my washer, the same happened with the full body mask.  She quickly applied it all over my body and in what felt just a few minutes, I was shown to shower it off already.  The water pressure wasn’t the best and though there were still tiny streams of what looked like blood coming down my legs, I was gently pushed aside to share the shower with another lady.  I got it: this is not a leisurely spa and the water wasn’t to be wasted.

Back on the platform, drying myself under the gaze of many pairs of eyes, the pace of things slowed.  I got to observe a young mother with her cute daughter of maybe 5.  The girl was both shy and giddy with excitement, studying me back, and at times hiding behind the legs of her mother.  A lot of smiles were exchanged. My washer lady finally relaxed: smoking a cigarette with her friends, she asked me questions.

I realized now that part of the reason why she had seemed to be in a rush was for her to get on her break and to find out who I was.  With our limited shared vocabularies (her English way better than my few words of Arabic), we got the basics down: age, married or not, from where, hometown now and eye color. We smiled and connected over our accomplishment of figuring this all out. These kind of moments are as rewarding as the ritual of bathing: finding the common ground with the other women you bathe with or who just washed you, no matter how different our backgrounds.

Content and relaxed, I returned to my hotel in the summer heat of Cairo.  I was tired and hungry and decided not to venture further for dinner that night than my hotel restaurant. As was customary, the owners were there; it took me about an hour before I got to eat, joining them first at their table and answering their many questions about my bathhouse experience.  It was a lovely chat. I got to meet the 90-something-years-old father of the siblings, who ran the hotel.  He’s the one who had bought the hotel in the 60s: the building was originally a British officers’ clubhouse, built in the late 19th century. 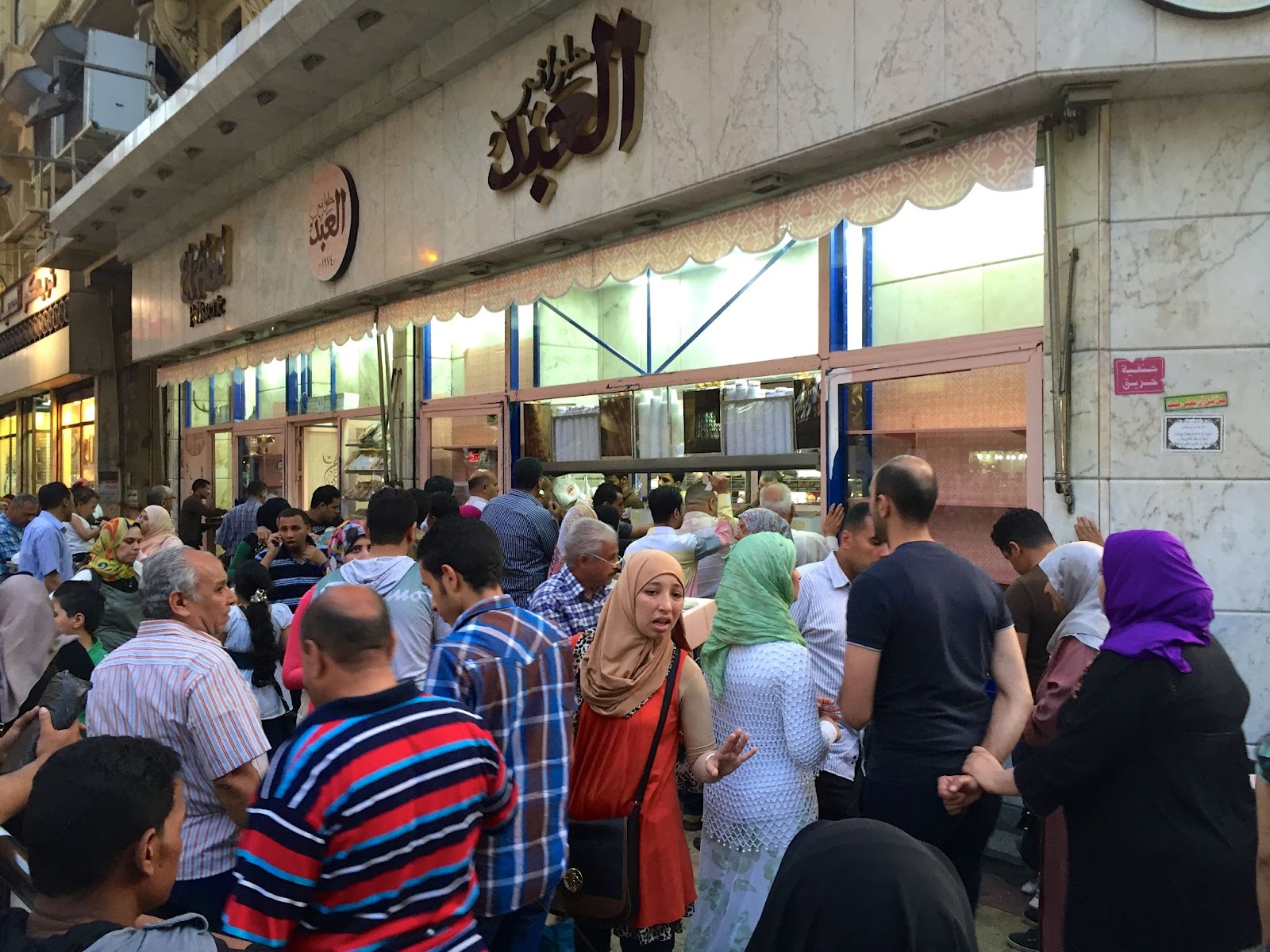 The old man’s elegant daughter, who I loved talking to, had never heard about the blood red body mask, so she asked the receptionist to call the bathhouse. It turned out to be a Nubian tradition, as the woman, who runs the bathhouse is Nubian. The ingredients for the mask are apparently all natural with a base of powdered dried beans called termis in Arabic and lupini in English.  The powder is mixed with herbs and oil, which make it red.  The name, directly translated, means “deer blood.” No wonder my skin felt so soft and fantastic.

The daughter explained her father our whole conversation as he was hard of hearing.  He seemed as surprised as his children that I had visited the bathhouse.  She then insisted that he, too, touches my skin, to feel the deer blood’s softening effect.  Clearly an old world gentleman, he hesitated and made sure twice this was OK with me. He then proceeded to touch my arm lightly with the tip of his right index finger.  The delighted look on his face – just at the interaction I assume – made my day as much as my encounters at the bathhouse.