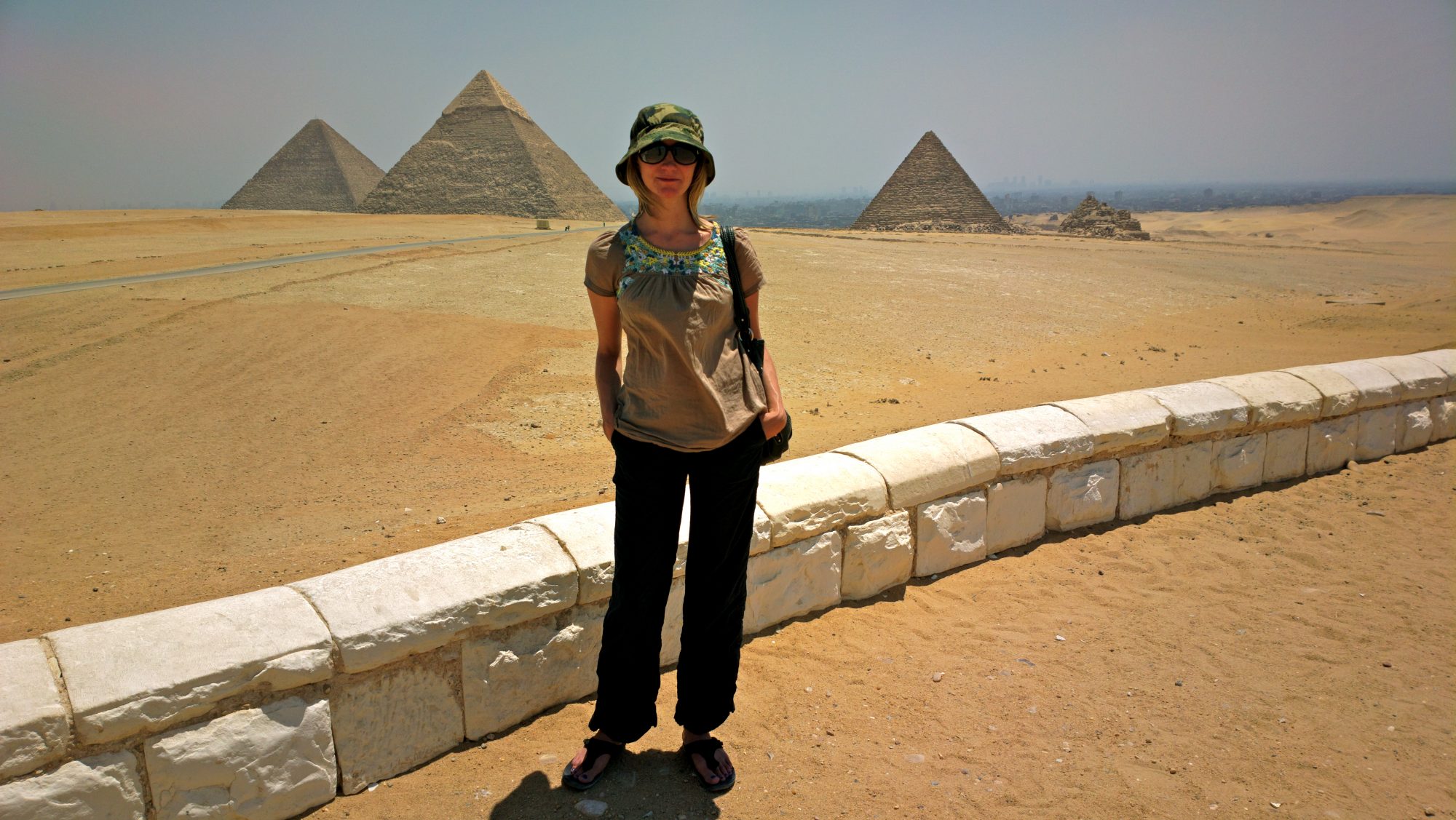 Mohammed is walking so fast in front of me I have a hard time concentrating on anything but keeping track of his black polo shirt and shiny hair. “It’s the wrong time of the day to come,” I think to myself.  The sun is relentless. There is so much sand in the air it’s hurting my eyes.

Then I see them.  Three groups of souvenir sellers spot their prey from a distance and dart at me at the same time.  Quicker than I can call Mohammed, furry toy camels and plastic pyramids block my view.  There are waving arms, shouting and shoving.  Though we’re almost seven miles outside of Cairo, this feels like real city chaos.

I’m trying to cope with the sudden onslaught by keeping my arms up protecting my face and repeating “la shukran, no thank you.” I’m not sure which is worse, the hawkers’ aggression or their desperation. They have lost all their business as most countries have issued a travel warning on Egypt and evacuated their employees living in the country.  It’s 2013 right after the revolution.

“Leave her alone, she’s not a tourist,” Mohammed comes to my rescue.  I don’t know what exactly he said but I imagine it’s something like that since it does the trick.

“Do you need to go inside?” Mohammed asks.  He works for a company my travel start-up is courting and doesn’t realize this is my first time at the pyramids.  I’m as excited as anyone else to see them up close but I answer hiding my excitement.

“You go ahead.  I’ll wait here.  The entrance is up over there,” Mohammed waves at the direction of the massive pile of stones right in front of me and lights a cigarette.

I continue approaching it. The great pyramid. The only surviving ancient wonder.

Up close the stones look bigger and more porous than in the pictures. I climb up towards the entrance holding onto them.  They feel rough against my skin.

Midway towards the entrance I turn back and take a look at Cairo.  It’s clearly visible though covered in smog.  The megacity is usually not in the pictures by showing the view the other way, as if the pyramids were isolated in the middle of a barren desert.

I see Mohammed further away on his phone.  He seems already just a tiny speck.

There’s a man checking tickets at the entrance. He looks about forty-five but is probably at least ten years younger, his face worn-out from years of checking tourists’ tickets in the direct sun. But today I’m the only one.

He looks at me curiously and a bit amused. I feel like for a moment he actually sees me.  As he’s tearing the stub from my ticket, he asks, “Would you like to go alone inside?” I think I detect a twinkle in his eye though his gaze is lowered.

“Yes!” I answer without hesitation, surprised by the question.

As I enter through the unassuming, cavernous entrance, I wonder whether there isn’t a protocol, whether someone should be accompanying me.

The descending corridor is long.  There are some dim lights illuminating the narrow staircase.  Although the sun is high up outside, it’s impossible to say what time of the day it is anymore.  I hold onto the metal railing, its surface pleasantly cool.

A strange feeling dwells up that I cannot name. It’s as if what’s happening is so momentous I cannot really grasp it. I wonder how many people have been alone inside the great pyramid.

I reach the small room called the king’s chamber. I had never thought about there being rooms inside the pyramid. The lighting is dim and there’s nothing but a modest stone sarcophagus inside to the right. No murals are decorating the walls like in the tombs in the Valley of the Kings in Luxor. It’s cool and damp. The silence is so intense it feels like a physical sensation, like a tiny genie blowing air on my skin.

I touch the sarcophagus and close my eyes.  I try to imagine all the people who have been in the chamber before me throughout thousands of years but I cannot.  I rather feel a slight energy, a pleasant buzzing vibration. It demands for once I don’t intellectualize.

I stay with my hand on the sarcophagus for a while, enjoying the moment, the silence, the palpable energy.  It’s impossible to say how long I stayed.

My limbs feel light climbing back to the exit. The closer I get, the more intense the light and the heat get, pulling me back to the outside world.  To the world of demonstrations and the military coup d’état that removed President Mohamed Morsi from power after serving just one year.  On the way to the pyramids, we passed a group of men building a road block on the road we needed to take back to Cairo. Mohammed and the driver had exchanged glances and a few words in Arabic but didn’t seem too alarmed.  I took their lead and didn’t ask about it though I assumed it was Morsi supporters protesting.

“How was it?” the ticket guy asks grinning as I come out protecting my eyes from the intense sun.

“Yes, thank you,” I answer and haste to add, “Thank you for letting me go alone.”

He lights a cigarette, turning his head away a bit.  I wait.

“You’re welcome,” he finally says, quickly glancing at me with another grin. Then he turns to his old Nokia.

I start climbing down, having a strange feeling like he knows something I don’t.  The further down I get, the more surprised I am that he didn’t ask for money, a bit of baksheesh. Most people working at famous tourist spots in these parts of the world are jaded, looking for a bit of extra money every chance they have.  Why hadn’t he?

Mohammed is all business when I find him chatting to our driver, explaining where we will go next.  I’m disappointed he didn’t ask about my experience.

Later that afternoon on our way back to Cairo, as I watch the monotonous fields alternating with the poor neighborhood one-story buildings and store signs, I keep thinking about the ticket guy at the pyramid.  Why had he allowed me to go inside alone?  Did he know I would like it or did he just want to be on his phone, following the news on the revolution?

Mohammed doesn’t say anything about it, but I see the roadblock has been dismantled.