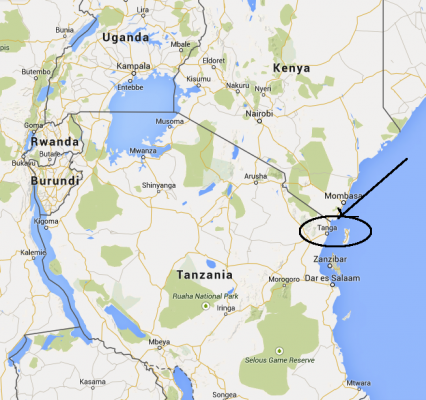 I really hadn’t planned my visit to Tanga at all: the previous night in Dar es Salaam I had randomly booked a cheap hotel online.  As soon as I got there after my 6-hour bus ride from Dar, I headed out to wander around in the afternoon heat in search of food.  Although a big city, Tanga has a sleepy feel to it and the dusty, unpaved streets added to it. When I couldn’t find food and realized my hotel wasn’t very close to the ocean, I took a piki piki, a motorcycle taxi, to the center.  But I still couldn’t find a place where to relax and eat.  Getting more frustrated and hangrier, I decided I was not liking Tanga and that I couldn’t leave it fast enough, which I decided to do early next morning.

Then I met a guy on a bicycle on another empty street.  His name was Ed, and he told me he’s a tourist guide who takes people on bicycle tours of Tanga.  I thought about it for a split second and said: “OK, but first you’ll need to show me where to eat something.” He took me to a place called “Coffee Bar,” but the very local establishment didn’t have anything to do with coffee.  It was rather just a bar, with some snacks.  I had said I’d like some seafood, as it was my last stop by the Indian Ocean on the trip, but the option of greasy, fried fish at this place didn’t look too appetizing.  So I ordered two skewers of beef with matoke — a type of fried banana.

As we sat down, I made perhaps the biggest mistake of the day: I decided to have a beer. I thought this was fine since I was in the company of someone and there were other women in the bar.  But at a closer look just a little later, I realized these other women were prostitutes and Ed confirmed my suspicion.  I should have known better. Then I made another mistake, maybe even worst than my first, as I asked him: “Would you like to have a beer, too?”

Happy as I was eating the simplest of meals (it was great though probably because I was starving) and enjoying the cold beer after a long bus ride and a walk on hot, dusty streets, Ed started the first in a series of bizarre, philosophical conversations.  Staring at his beer bottle, he asked, in all seriousness, “why do people drink alcohol?” I love conversations like this and was happily surprised to hear a guide in Tanga start one.  But he didn’t look too satisfied with my view that it’s a basic human impulse and responded, “When women drink, they become sexually loose and will sleep with anyone.” Whoa!

But he didn’t stop there: “Look at the prostitutes, they drink so they’re relaxed enough and not too shy to have sex.” And: “It’s not safe for you to drink as you’re traveling alone.” I told him to slow down and, bluntly, that I can easily have a beer without sleeping with anyone I meet, including him. “African women at least are like that.” Really now? “And besides, it’s hard to stop drinking once you have a beer.” “You just watch me do it,” I told him, getting increasingly annoyed but also understanding that the rest of the world has very different attitudes towards women drinking than we do in the West.  But as crazy as his comments were, he didn’t seem threatening in any way, rather a bit depressed or lost, so I trusted my intuition and decided to go ahead with the tour.

After we had taken a matatu (a collective mini bus) to a place where we rented bicycles and had cycled around in the lovely late afternoon weather, I found out it was Ed who had an issue with alcohol: he wanted to stop at any and every bar to have a beer. But, because I so insisted, I still managed to see quite a bit: an upscale neighborhood with beautiful houses by the Indian Ocean and a little park with Ocean views, with a bar I refused to stop at. We had an interesting discussion about bicycles after I said it was great to see so many in Tanga.  Ed responded that there’s nothing great about it as it merely means that people in Tanga are poor.  He couldn’t believe me when I told him that high paid CEO’s in Europe might cycle to work for exercise and environmental reasons.  “Wouldn’t happen in Tanzania,” he said, “people want to show if they have money.”

Then we visited a German graveyard where he told me another bizarre story: As the Germans left “The German East Africa” after their defeat in World War I, many of them in Tanga hid jewels underneath their properties.  Ed claimed in recent years to have taken around many Germans, who came to Tanga only to look for their forefathers’ treasures.  Apparently once they find the property in question, they buy it from the current owners only to tear it down to find the buried jewels and then return to Germany.  There are rumored jewels also in the German graves and also underneath Tanga’s famous clock tower.  An unbelievable story, though to my surprise a week later I heard it again from someone else, too.

Next stop was an empty discotheque (it was still early and Monday), where he finally had another beer but I didn’t.  Now the conversation was about religion:  he couldn’t believe I had not followed the religion of my parents, asking, with utter disbelief, “How could you not?” I don’t think my answers were very good as I had never, in my rebelliousness, thought much about it. He himself had a Muslim father and a Christian mother – a rare occurrence – and, unlike his Muslim brothers, chooses to follow both religions, for which he is often chastised.

At dinner – we found a food stand with seafood, next to a bar of course – he finally revealed what all the talk about women drinking and being promiscuous must have been about: he used to be married with a daughter in Zanzibar and he owned a bar there.  One day out of the blue, according to him, his Zanzibari wife announces that she has found someone else, a Zanzibari man mind you, and that Ed should just go back to the mainland where he belongs.  This was followed by a long, bitter speech about how difficult it is for anyone from the mainland Tanzania to live and work on the island, with the laws on the islanders’ side.  And how he lost his life’s work: the bar.

As I was eating my delicious fried shrimp, and watching him down yet another beer, I couldn’t help but wonder how much of his story was really true.  He was bitter for real, but had his wife left him for his alcoholism rather than her being a cheat and against mainland Tanzanians?

Suddenly I could hear live music nearby and asked him to take me to see what’s going on before I went to my hotel.  He was reluctant because the music came from the ruling political party’s rally “to buy votes,” as he put it.  They had brought famous Taarab singers for a free concert and if you registered as a party member, you’d get a free beer.  Apparently Ed’s hatred for this party was stronger than his love of beer as he wouldn’t consider doing so.

But this is understandable: this same party’s leaders had been involved in a corruption case only a few months earlier.  Ministers and other high up government officials had been caught taking out cash from government accounts at Dar ATMs, and wheeling the heaps of money out in wheelbarrows. (The highest note of Tanzanian shillings is 10,000, which is not much more than $5 at the moment.) It was rumored that the president himself was involved but most people got no punishments, except one fired cabinet member.  The international bank must have also been in the know as such large sums were being withdrawn.  Ed ended his rant against the political party by a grim prediction: “There will be a civil war.  Very soon. No other option in sight.”

I tried to file this disturbing statement under the other unbelievable stories he told me that night, but I couldn’t quite shake it off.  Yet I managed to enjoy the glimpse of Taarab I got to see.  The songs are in very poetic, complicated Swahili, mostly sang by a group of plus sized women.  Apparently, or so my friend told me, all the songs, which are often about 20 minutes long, are about sex.  The most famous singers are big celebrities in Tanzania and quite wealthy.  Ed told me the lead singer we were listening to was from Zanzibar and rumored to be the president’s mistress.

After escorting me to my hotel, Ed wanted his salary right away, and not in the morning when he was supposed to pick me up to take me to my bus.  I gave him only half of the money because he said he was going to go drink it right away, and said he’d get the rest in the morning.  When he picked me up in the morning, looking all hang over, perhaps he appreciated my decision.  All in all, I ended up paying my character of a guide too much for the tour, but then again if I hadn’t, I would have never heard all those entertaining, sometimes disturbing stories, found the best seafood stand in town and ended up in a free Taarab concert (my only one the whole trip). Sometimes it’s just worth it.